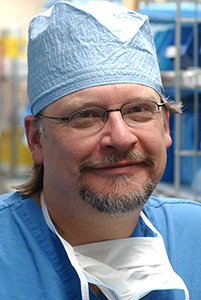 “I was ecstatic to get into the Deaconess program and enjoyed every minute of it.”

By the time he was 20, R. Clement Darling III already knew his way around a hospital, having worked for four years following high school as a vascular lab technician at Massachusetts General Hospital.

In the years that followed — as an undergraduate at Trinity College and for several years following graduation — Darling continued working in hospitals; as a surgical assistant at Mass General and a surgical lab technician at Children’s Hospital Boston. By the time Darling entered medical school at the University of Cincinnati Medical College at the age of 25, he had logged more time in hospitals than most interns.

Perhaps it’s not all that surprising, since Darling’s father, after whom he was named, was a renowned Mass General vascular surgeon. What is surprising perhaps is that Darling — himself now a nationally respected academic vascular surgeon in Albany, New York — “never imagined in my wildest dreams going into academic surgery, and certainly not vascular surgery,” he says, adding that he once considered becoming an interventional cardiologist.

The lure of surgery

Ultimately, the lure of the familiar world of surgery was too great for Darling to resist. After receiving his medical degree in 1984, Darling wanted to return to Boston and had heard great things about the Harvard/Deaconess Surgical Service (the integrated General Surgery Residency Program was created in 1996 with the merger of New England Deaconess Hospital and Beth Israel Hospital). He applied and was accepted.

“I was ecstatic to get into the Deaconess program and enjoyed every minute of it,” says Darling. “We worked really hard, but we had a great camaraderie and got to participate in a large number of complex cases.” To this day, Darling, who is president of The Vascular Group in Albany — one of the highest-volume vascular care networks in the nation, with 18 surgeons and encompassing 14 hospitals — says he still enjoys “high-volume, high-risk surgery.”

It was during his residency, particularly during his third year under then-Department of Surgery Chief Glenn Steele, MD, that Darling was first bitten by the research bug. “Dr. Steele was the consummate academician,” says Darling, with obvious admiration. “He pushed us to be data driven — to base every decision not on how it was done in the past, but on objective data.”

After completing his residency, Darling headed to Albany Medical Center Hospital for a year-long fellowship in vascular surgery. Although he loved Boston, he decided to stay at Albany after graduation because it offered him the volume and complexity of cases he desired.

Albany also had another advantage: It had a huge registry that gave him a treasure trove of data with which to conduct outcomes research. “I found it fascinating to pore over all the data,” he says. “It became a fun obsession, sort of like collecting baseball cards. I loved it and would get up at 4 a.m. to write papers.”

Darling’s passion for outcomes and clinical research is evident in his CV, which lists more than 160 peer-reviewed papers and more than 80 book chapters. He is especially proud of a paper he authored that was published in The Journal of Vascular Surgery in 1999. In it, he cited data demonstrating that a new, controversial open procedure to treat abdominal aortic aneurysm was, in fact, quite risky, and that other options, including recently introduced endovascular techniques, offered better outcomes. “That paper made everyone rethink the whole process and changed our clinical practice,” says Darling.

While he continues to do outcomes and clinical research, Darling is now focusing much of his attention on one of the biggest challenges in health care: How to deliver high-quality, cost-effective care. A key element of this, he believes, is a team approach that relies on a well-trained ancillary staff and the centralization of specialized expertise and services — an approach that has enabled his group practice to grow and thrive.

In addition to overseeing his large clinical network and serving as Chief of Vascular Surgery at Albany Medical Center Hospital, the indefatigable Darling wears many other hats. He is a Professor of Surgery at Albany Medical College, has appointments on many national and regional vascular surgery societies, and currently serves on the board of the Society for Vascular Surgery.

He is also the Director of the Institute for Vascular Health and Disease, which conducts research; Director of the Vascular Intensive Care Unit (VICU); and works closely with the Center for Vascular Awareness, which provides educational services to physicians, nurses, and patients.

Looking back on his decisions — to become an academic vascular surgeon and to remain in Albany — Darling has no regrets. “It’s a very good life,” he says.