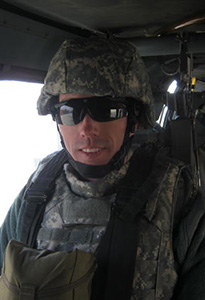 "I’m very fortunate to have trained at BIDMC, where I had fantastic mentors and a broad experience with many high-risk, high-acuity patients."

A 22-year-old U.S. Army soldier who was shot and seriously wounded in 2010 in Afghanistan is alive and well today because Jeremy Cannon, MD, now a Colonel in the U.S. Air Force Reserves, believed that soldiers with post-traumatic acute respiratory failure should have access to extracorporeal membranous oxygenation (ECMO) in the combat theater.

ECMO, an advanced technology that takes over the functions of the lungs for days to weeks, had previously been considered too costly and cumbersome to be made available to wounded soldiers in the combat theater. Cannon, who served three tours of duty in Afghanistan and Iraq, wasn’t convinced. He knew, for example, that recent advances had made ECMO safer and more compact, and that it potentially saved lives, even in austere environments. Knowing also that respiratory failure greatly complicated patient transport and was responsible for a significant number of post-resuscitation combat deaths, Cannon felt compelled to act.

Backed by research, Cannon persuaded the top brass that ECMO should be offered to soldiers in combat settings and then set the wheels in motion to make it happen. The 22-year-old soldier, who Cannon treated once the young man arrived stateside, is just one of potentially hundreds of soldiers whose lives will be saved as a result. For his role in establishing the first Department of Defense Adult ECMO Program, as well as his exemplary service as Deputy Commander of Clinical Services in Afghanistan, the Air Force Association presented Cannon with the 2011 Paul W. Myers Award. The prestigious award, given to an Air Force Med Corps officer who “made the most significant contribution to the continued good health of the men and women of the U.S. Air Force,” was presented at a ceremony in Washington, D.C., which was attended by luminaries such as the Secretary of the Air Force.

How Cannon came to be on that stage is a tribute to his intelligence, dedication, and leadership. But serendipity also played a role. Cannon attended the U.S. Air Force Academy intending to become a pilot. “But I soon realized it wasn’t like ‘Top Gun’ and I found it hard to get excited about ground school,” says Cannon, so he majored in biochemistry. One day he had an opportunity to observe a surgical operation, and got hooked. “I knew then I wanted to become a surgeon,” he says.

After graduating from Harvard Medical School, Cannon was matched to the BIDMC General Surgery Residency Program. He made an indelible mark on his mentors, who remember him fondly, and they made an equally lasting impression on him. During his residency, Cannon earned a master’s of science in mechanical engineering from Massachusetts Institute of Technology and, following graduation, completed a one-year clinical fellowship in surgical critical care at Boston Children’s Hospital.

“I’m very fortunate to have trained at BIDMC, where I had fantastic mentors and a broad experience with many high-risk, high-acuity patients,” says Cannon. “When I went into combat, I felt so well trained that I was able to walk into the OR without fear and get to work.”