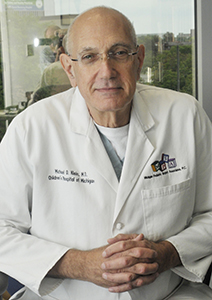 “My career-long interest in adapting surgical techniques to the pediatric population began during my residency."

Pediatric surgeon Michael Klein, MD, has plenty to boast about — if he were the type to brag. He is the Arvin I. Philippart, MD, Endowed Chair in Pediatric Surgical Research at Wayne State University and Children’s Hospital of Michigan, where he formerly served as surgeon-in-chief and director of two surgical training programs. Recognized nationally for his work, Klein is also president-elect of the American Pediatric Surgical Association. And in 2012 he became the first pediatric surgeon ever to be nominated for the presidency of the American Academy of Pediatrics, eventually becoming the runner up.

But what Dr. Klein is most proud of is making a difference in the lives of children. “When I was training as a surgeon, pediatrics was just emerging as a subspecialty,” Dr. Klein says. “I like to think I’ve helped advance the field in some small way.”

Dr. Klein didn’t set out to become a surgeon. He majored in medieval history at the University of Chicago and began graduate studies in the field at Princeton University. “Like a lot of people who came of age in the 1960s, I experienced a relevance crisis,” he says. “As much as I enjoyed studying medieval history, it didn’t seem to help anyone.”

So he decided to apply to medical school. First, he bolstered his academic credentials by attending graduate school in chemistry at Case Western Reserve University in Cleveland. He did so well he was awarded a scholarship to attend Case Western’s medical school. “The faculty at the medical school who most impressed me were the surgeons,” Dr. Klein says, “and I discovered I liked doing procedures.”

After an internship at the University of Washington, Dr. Klein began his residency at the Fifth (Harvard) Surgical Service (the predecessor to BIDMC’s Department of Surgery), then based at Boston City Hospital. Ever eager for new challenges, Dr. Klein decided to take two years to do laboratory research and perform surgery at Boston Children’s Hospital. The time at Children’s proved pivotal: Dr. Klein decided to become a pediatric surgeon. “Children are more than ‘little adults,’” Dr. Klein points out. “My career-long interest in adapting surgical techniques to the pediatric population began then.”

Dr. Klein resumed his residency just as William V. McDermott, MD, then its director, relocated the Fifth (Harvard) Surgical Service to New England Deaconess Hospital. As a result, Dr. Klein finished his training as chief resident at the Deaconess — where he met a surgeon who remains a lifelong influence — Frank C. Wheelock Jr., MD.

“Frank Wheelock was my foster father in surgery,” Dr. Klein says. “He was an elegant surgeon with meticulous technique. From Frank, I learned not only about surgery but also the responsibility of taking care of patients.”

After holding positions at the University of New Mexico and the University of Michigan, in 1983 Dr. Klein joined the Children’s Hospital of Michigan and Wayne State University, where he has been ever since. In addition to his clinical work and teaching, Dr. Klein is a prolific researcher, with nearly 250 papers published in peer-reviewed journals. He has also authored or collaborated on chapters in 24 textbooks.

In his rare free time, Dr. Klein likes to take adventure vacations with his wife, Peggy, and the couple’s children. Dr. Klein has explored Machu Picchu, climbed Mount Kilimanjaro, and hiked across Wales. “I like a challenge,” he says.

And that, of course, would be an understatement.