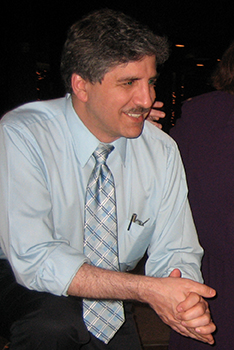 “I was taught that no matter what it took, you always did what was best for the patient and you didn’t give up.”

When Mark Puder, MD, PhD, was a surgical resident at New England Deaconess Hospital in the late 1980s, he planned to take 18 months after his third year to focus on research before completing his residency. But he found he enjoyed research so much that he wanted to continue. With the enthusiastic support of the residency program’s directors, Puder spent the next five and a-half years earning a doctorate in virology and biochemistry from Harvard, after which he returned to the hospital (now the merged Beth Israel Deaconess Medical Center) to finish his residency.

“Because the residency program was so supportive of research, I was able to follow my
interests,” says Puder, who after graduation from BIDMC completed a pediatric surgery
fellowship at Children’s Hospital Boston (CHB). “There were many surgeon-scientist
role models at BIDMC and the hospital had a strong culture of academics, both of which had a major influence on my career.”

Puder now devotes about 70 percent of his time to basic and clinical research and the rest to patient care and teaching. Puder’s research has always been inspired by what he sees in the clinic. For example, he had witnessed too many young children die or require a transplant as a result of cholestasis, a liver disease that once afflicted 60 percent of children who required prolonged intravenous (parenteral) feeding. Virtually every child whose cholestasis persisted for one year died.

Back in his lab, Puder discovered that the major cause of injury to the liver from parenteral nutrition was the type of intravenous fat being used (based on soybean oil). He substituted it with a fish oil-based fat, and that made all the difference.

“At Children’s, we went from two to six deaths or transplants a year for this disease to none in six years,” says Puder. This new treatment is now being used by more than 100 hospitals around the world, and the number of transplants in the U.S. from parenteral nutrition-associated liver disease has dropped significantly.

Puder’s research also led to the discovery of a potential new treatment — which will be evaluated soon in a clinical trial — for intra-abdominal adhesion after surgery, a major cause of morbidity and death. Among many other projects, he is also focusing on finding a treatment for fatty liver disease, which affects 30 percent of the U.S. population and can lead to cirrhosis of the liver.

Puder credits the BIDMC General Surgery Residency Program for giving him the freedom to pursue his passion for research and also for teaching him an invaluable lesson that has been his lodestar throughout his remarkably productive career as a surgeon-scientist.

“I was taught that no matter what it took, you always did what was best for the patient and you didn’t give up,” he says. “Whether I’m in the lab or the clinic, that dedication to patients has been a driving force throughout my career.”