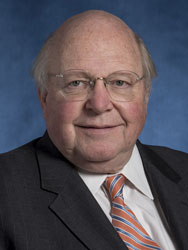 "I look back on my residency training and realize how it made me the person I am today."

After graduating with highest distinction from Northwestern University Medical School in 1968, Dr. Manson interviewed at three of the most prestigious general surgery residency programs in the country, including the Fifth (Harvard) Surgical Service at New England Deaconess Hospital, the predecessor to the BIDMC General Surgery Residency Program. At the time, the “Fifth” was Dr. Manson’s third choice and he was disappointed when he was not accepted into the other two. But nearly five decades and one illustrious, remarkably productive career later, Dr. Manson believes that not getting his wish was one of the best things that ever happened to him.

"I look back on my residency training and realize how it made me the person I am today,” says Dr. Manson, a full-time member of the Johns Hopkins Hospital Department of Plastic Surgery. “I learned so much from faculty mentors like [then Chief] Dr. William McDermott, Dr. Judah Folkman, and Dr. Frank Wolfort, and also my fellow residents. I learned the importance of respecting patients and colleagues, to be honest about what works and what doesn’t and changing how you do things based on that, and working hard as a member of a team to achieve the best outcomes. It’s not about the facts or the technical details of surgery that stay with you from your residency training,” he says, “it’s the lessons about how to conduct your life. How lucky I was to have been accepted into that program!”

After his first year of residency, Dr. Manson served for nearly three years in the U.S. Army Medical Corps in Panama. During that time, he commanded the largest U.S. Army Health Clinic and received an Army Commendation medal for heroism after rescuing victims from a hospital following the 1972 earthquake in Nicaragua that killed more than 7,000 people. “It was total devastation, with buildings collapsing everywhere,” he recalls. “Somehow I managed to not get killed while getting patients out of that crumbling hospital.”

Following his discharge from the Army in 1973 at the rank of major, Dr. Manson did another year of a surgical fellowship in colorectal surgery at Lahey Clinic before completing his general surgery training in the Harvard Fifth. Influenced and impressed by plastic surgeon Dr. Wolfort, Dr. Manson decided to do his fellowship in plastic surgery at Johns Hopkins, where he has remained since completing the program in 1978. He was promoted to professor in 1987.

During his tenure at Johns Hopkins, Dr. Manson has held many senior leadership roles and received some of the hospital’s and medical school’s highest honors. In 2012, for instance, he was named a Distinguished Service Professor by the Johns Hopkins School of Medicine, one of only 26 individuals and the only division chair in the 122-year history of the institution to be so recognized. He also was Director of the Johns Hopkins-University of Maryland accredited Fellowship in Craniofacial Surgery for 10 years, and for 16 years was Director of the Johns Hopkins-University of Maryland Plastic Surgery Program.

During his early years at Johns Hopkins, Dr. Manson volunteered to cover nights for the plastic surgery service at the University of Maryland Shock Trauma Unit. It was there that he became interested in traumatic facial injuries and how to treat them to achieve the best possible result. “This became my quest,” says Dr. Manson.

At the time (the late 1970s and early 1980s), trauma patients with severe facial injuries were treated first for their other injuries and only later, using closed techniques, for the injuries to their faces. “But then, as now, with delayed treatment you can’t get a good result,” explains Dr. Manson, who pioneered the acute treatment of traumatic facial injuries. He also was among the first to recognize that open procedures to repair or replace bone, first using wires and later rigid fixation devices like plates and screws, were also critical to good outcomes.

“Early, open anatomic reduction [repair or replacement] of bone revolutionized facial fracture treatment,” says Dr. Manson, whose classification of and algorithms for aesthetic reconstruction of facial defects from trauma and, later, cancer are now used by plastic surgeons worldwide. The fixation equipment and implants for facial and orbital fractures that Dr. Manson designed also had a far-reaching impact.

In addition, Dr. Manson has been president of and is still actively involved in the AO Foundation, a voluntary international society of 12,000 surgeons dedicated to excellence in the surgical management of trauma and disorders of the musculoskeletal system.

Dr. Manson has also been editor of or served on the editorial boards of the leading plastic surgery journals, including Plastic and Reconstructive Surgery, Annals of Plastic Surgery, and the Journal of Craniofacial Surgery. He currently is editor of the International Journal of Craniomaxillofacial Trauma & Reconstruction. At last count, Dr. Manson has authored more than 435 papers, 111 book chapters, and five books.

For his innumerable contributions to his field, Dr. Manson has received dozens of prestigious honors and awards. In 2006, for instance, he received the Clinician of the Year Award from the AAPS, and in 2014 the AAPS gave him its inaugural Lifetime Achievement Clinical Research Award.

Among his most treasured honors, however, is the inaugural Robert Goldwyn Mentor Award, which was presented by the American Council of Academic Plastic Surgeons in 2012 (the late Dr. Goldwyn, whom Dr. Manson knew well, was Chief of Plastic Surgery at Beth Israel Hospital from 1972 to 1996).

Today, Dr. Manson’s busy clinical practice focuses largely on facial reconstruction of patients with significant facial skin cancers. “From treating trauma patients, I learned a lot about how to treat patients with skin cancer,” he says — knowledge that he used to develop and refine algorithms now used by countless other plastic surgeons.

These days a typical patient of Dr. Manson’s might need a nose reconstructed or a large amount of facial tissue replaced as a result of cancer. “These people’s lives are potentially devastated,” he says. “If I can achieve a good aesthetic result so my patients can go out in public and no one will know anything has been done, it gives me enormous satisfaction. Of all my roles, helping patients through their problems is my favorite.”

At this stage of his career, someone less dedicated than Dr. Manson might be thinking about what to do when he eventually retires. “Everyone’s on me now to get a hobby, but I’m hoping to defer that as long as possible,” he quips, only half in jest. For now, Dr. Manson is happiest doing what he has always done: seeking innovative ways to continually improve the care of people whose faces have been disfigured by illness and injury.