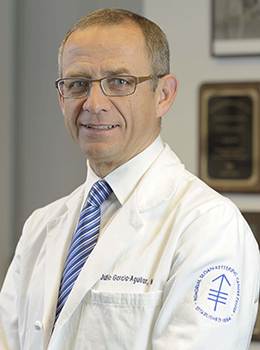 “We were taught to pay tremendous attention to detail, to be on top of all the patient’s medical issues, and that nothing is too good for the patient.”

When Dr. Julio Garcia-Aguilar was in medical school at Universidad Complutense in his native Spain, he did a brief rotation at a U.S. hospital that convinced him he wanted to return to this country someday to continue his training.

“This was the 1980s and most of the exciting things in surgery were happening in the United States,” says Dr. Garcia-Aguilar, Chief of the Colorectal Service at Memorial Sloan-Kettering Cancer Center in New York City. He is also Bennot C. Schmidt Chair in Surgical Oncology at Memorial Sloan Kettering and Professor of Surgery at Weill Cornell Medical College.

That opportunity arose just a few years later when Dr. Garcia-Aguilar, who was completing his surgery residency at Universidad Complutense, met Mark Weinstein, MD, a surgeon from Beth Israel Hospital who was in Madrid on business. Dr. Weinstein persuaded the young surgeon to come to Boston for an additional year of clinical training at Beth Israel Hospital’s General Surgery Residency Program, which was then led by William Silen, MD.

“I liked it so much I ended up doing three and a half clinical years and three years of basic research [with Timothy Springer, PhD, of Harvard Medical School],” says Dr. Garcia-Aguilar, who earned a doctorate in cell biology.

While Dr. Garcia-Aguilar had been exposed to excellent technical expertise in Spain, he found something special at Beth Israel that remains with him to this day: the faculty’s unwavering focus on excellence for the benefit of the patient.

“Dr. Silen and the other clinicians I trained with at Beth Israel were superb,” says Dr. Garcia-Aguilar. “We were taught to pay tremendous attention to detail, to be on top of all the patient’s medical issues, and that nothing is too good for the patient. Dr. Silen, especially, taught us to be good doctors — not just good surgeons — and to take care of each patient as a whole person. That striving for excellence and focus on the patient has stayed with me throughout my career.”

Dr. Garcia-Aguilar remembers his time in Boston fondly. “Those were great years that I wouldn’t trade for anything,” he says. He admits, however, that he found it challenging to master English. “I could read English well but my conversational English was pretty bad, so if got a call or page, I’d always show up in person so I could write down instructions and communicate with the help of body language. Everyone must have thought I was especially dedicated or polite but I was just trying to be understood!”

At Memorial Sloan Kettering, Dr. Garcia-Aguilar wears many hats. In addition to a busy clinical practice treating people with colon and rectal cancer, he conducts basic and clinical research focused on improving outcomes for patients with these diseases.

For example, Dr. Garcia-Aguilar’s current National Institutes of Health-funded study is evaluating the role of chemotherapy prior to surgery in sparing the rectum of patients with rectal cancer. He also conducts basic research to investigate the mechanisms that make some tumors unresponsive to chemotherapy or radiation, with the goal of finding new treatments. “I hope that someday my research makes a small contribution to changing the field,” he says.

Dr. Garcia-Aguilar also publishes widely, lectures internationally, serves as associate editor of two leading colorectal cancer journals, and mentors colorectal fellows at Memorial Sloan Kettering, in addition to managing his administrative responsibilities. “I enjoy the variety of my work and especially the daily gratification I receive from helping patients,” he says.

The rare times when he is not working, Dr. Garcia-Aguilar, who is married and has two adult sons, enjoys reading, riding his bike with his cycling group, and visiting his home village in the province of Toledo, Spain, where his parents and many longtime friends still live.