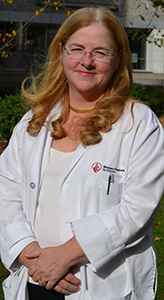 As a surgeon who has long specialized in the care of adults and children who have suffered burns, Colleen Ryan, MD, has countless memories of the courage and determination of her patients, many of whom have endured devastating injuries as a result of fires or accidents.

But one of the most memorable moments happened only recently. Ryan, who has been on staff for many years at Massachusetts General Hospital and the Shriners Hospitals for Children-Boston, visited her patient — a survivor of the Rhode Island Station Nightclub fire who had been terribly burned — shortly after he’d undergone a hand transplant. “I remember when we had to remove his hand,” she says, “so seeing him with a new hand was especially gratifying.”

Ryan chose a career that she says has been gratifying in virtually all respects. She had initially wanted to go into medicine but, while at Georgetown University School of Medicine, decided that surgery suited her personality better. Though few women went into surgery at the time, Ryan has never regretted her decision.

“What I liked, and still like, about surgery is that you get things done — that when something bad happens to a patient, such as a serious burn, you can be immediately helpful…useful,” she says. “While you can certainly do that in other specialties, it’s rarely as vivid as in this field.”

Ryan, who launched Mass General’s Burn Recovery Program and is Director of the hospital’s Fraser Outpatient Burn Service, also finds it rewarding to care for patients over the long term, helping them with the often-lengthy and difficult process of reintegrating to their everyday lives. She also enjoys being involved in many other areas related to her specialty, from teaching and research to leading burn-prevention initiatives at the regional and national level.

“I’m especially passionate about [burn] prevention,” says Ryan, who has been actively involved in helping get legislation passed on firework safety, fire-retardant children’s sleepwear, home oxygen safety, and fireless cigarettes, which has significantly reduced injuries and deaths from burns.

Ryan’s research, which spans investigations of metabolism in burn patients to outcomes studies, has also had a profound impact. For example, her oft-cited 1998 New England Journal of Medicine paper describing a simple method for objectively estimating mortality following burns provided a much-needed tool for physicians to use when discussing resuscitation decisions with families of severely burned patients.

In addition, Ryan’s description of — and new and perhaps other treatments for — a syndrome of neuropathic-like pain in burn scars is also helping relieve patients’ suffering and enabling them to go back to work and resume their normal lives. She has also led the way in incorporating Integra artificial skin into the standard management of burn patients, demonstrating in one published study that it significantly reduces intensive care unit length of stays following massive burns.

Ryan trained at New England Deaconess Hospital in the mid-1980s when William V. McDermott, MD, and his successor, Glenn Steele Jr., MD, headed the surgical residency program. She spent one year as a registrar (a resident-like position) in London, and following graduation in 1988 joined the faculty at Mass General. Subsequently, she completed five years of research fellowships at Mass General and Shriners Hospitals for Children-Boston.

“The Deaconess offered a very intense learning experience because we took care of the sickest patients,” says Ryan. “It was an exciting time, as the hospital was doing the first liver transplants, the first gastric bypass operations, and had a very busy cardiac surgery service. We saw the entire breadth of surgery and critical care, and had many wonderful teachers.”

Dr. Steele, in particular, made a lasting mark on Ryan. “He was a very insightful surgeon who championed evidence-based medicine. He believed that the way to advance the frontiers of surgery is to identify where we have failed, and work to fix it. That lesson has stayed with me.”

In keeping with Steele’s legacy, Ryan plans to focus her efforts increasingly on areas she believes need improvement. “With burn patients, we often fail at prevention, infection, and some psychosocial issues,” she says. “My long-term goal is to help figure out how we can do these better and further improve patients’ lives.”