“We worked very long, very hard hours…but we had great senior residents and I learned a huge amount. My Senior Registrar year in Leeds was the best year of my life.” 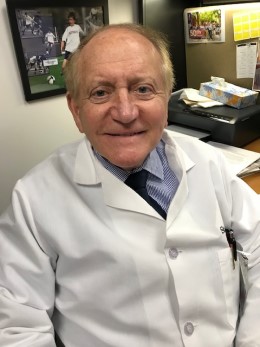 For as long as he can remember, Marvin L. Corman, MD, wanted to be a surgeon. Starting at age 15 and continuing until his graduation from the University of Pennsylvania, the Philadelphia teenager worked every summer at Hahnemann University Medical College, conducting library and animal research in the Department of Anatomy. “I was always attracted to the romance of surgery, so there was never any doubt about becoming a surgeon,” says Dr. Corman, author of the definitive textbook on colon and rectal surgery that bears his name.

Following his graduation from the Perelman School of Medicine at the University of Pennsylvania, Dr. Corman matched to his first choice of general surgery residency programs: the Fifth (Harvard) Surgical Service, the predecessor of the Beth Israel Deaconess Medical Center General Surgery Residency, which was then based at Boston City Hospital. In 1973, the Fifth Surgical Service, known to its alumni as “Five Surg,” was relocated to New England Deaconess Hospital, which in 1996 merged with Beth Israel Hospital to become Beth Israel Deaconess Medical Center.

In 1965, full of youthful enthusiasm, Dr. Corman began his residency. But his early experience was not what he expected and he was sometimes disheartened. “Back then, residents at Boston City did everything: we drew blood, transported patients, and worked very long, very hard hours without much supervision,” he says. “But we had great senior residents and I learned a huge amount.” Dr. Corman particularly enjoyed his rotation at New England Deaconess Hospital, where he fondly recalls an influential mentor, Chief of Surgery Cornelius Sedgwick, MD, “a master surgeon and wonderful person.”

Leeds: ‘The best year of my life’

During his PGY3 year, Dr. Corman was encouraged to spend a year at the University of Leeds in England as a Senior Registrar (equivalent to a chief resident) with Professor John C. Goligher, a world-renowned authority on colon and rectal surgery. “I was excited about the opportunity to go to London,” recalls Dr. Corman, who was thrilled to be accepted (but dismayed when he discovered that Leeds was some 200 miles from London!)

But his disappointment did not last long. “It was the best year of my life,” says Dr. Corman. “At first I was way in over my head but I got to work as first assistant with Professor Goligher and did more than 1,000 operations that year.” He recalls one day when he did 21 operations on his own. It was during this formative year that Dr. Corman decided he wanted to follow in Professor Goligher’s footsteps and specialize in colon and rectal surgery.

After returning to Boston and finishing his residency in 1971, Dr. Corman joined Lahey Hospital & Medical Center in Massachusetts, where he was a busy staff surgeon for nearly 11 years. During this period, Dr. Corman teamed up with two other Lahey surgeons to write a textbook on colon and rectal surgery. Although he had already written 12 chapters, the project was interrupted when Dr. Corman relocated to California to join the Sansum Medical Clinic in Santa Barbara.

Determined to see the project through to completion, but remembering the challenges of getting others to submit their chapters on time, “I decided to write the book myself,” says Dr. Corman. He found a publisher [Lippincott, now Lippincott, Williams & Wilkins], which was delighted to publish it, and a medical illustrator, Lois Barnes, whose work has graced the pages of all six editions. 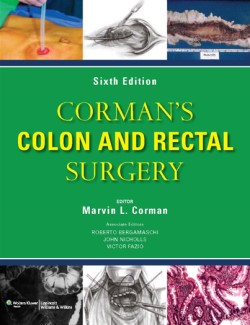 Published in 1984 and 780 pages long, the first edition of Colon and Rectal Surgery received first prize from the American Medical Writers Association in 1985 as Dr. Corman wrote the next four editions, which came out about every five years and grew in size and scope with each printing. Reflecting Dr. Corman’s love of history, every edition includes biographical sketches of surgeons throughout history who have made contributions to the field.

During his years on the West Coast, Dr. Corman was on the faculty at UCLA Medical Center and later, the University of Southern California. In 2001, he returned East to serve as Vice Chair of Surgery for the North Shore/Long Island Jewish Health System and in 2004, he was recruited to SUNY Stony Brook University, where he is a Professor of Surgery.

In 2012, the sixth edition of his book — now nearly 1,600 pages long — was published, a milestone that was celebrated by the American College of Surgeons during its annual Clinical Congress that year. For the first time, the book included Dr. Corman’s name in the title and had associate editors: colorectal surgeons Roberto Bergamaschi, MD, PhD; R. John Nicholls, MD; and Victor Fazio, MD. Described by the Journal of the American Medical Association as the “gold standard in its discipline,” Cormans’s Colon and Rectal Surgery has long been considered the bible of textbooks for colorectal and general surgeons. It is on the shelves of virtually every medical library and surgery department in the nation, and has been translated into Spanish, Portuguese, Chinese, and Turkish.

While Dr. Corman is justifiably proud of his textbook, he is prouder still of his contributions to the education of aspiring colorectal surgeons. During his career, he has led five colorectal surgery residency programs, three of which he founded: at Sansum Medical Clinic — the first colorectal residency program in California; at North Shore/Long Island Jewish Health System; and at Stony Brook University.

“My greatest joy is teaching, and I love to be around young people,” says Dr. Corman. Now 79, he is still actively engaged in teaching residents as well as writing, and continues to lecture frequently as a visiting professor around the world. “I’m a bit of a thespian and love public speaking,” he admits. One of Dr. Corman’s most memorable invitations was to present the first John C. Goligher Memorial Lectureship at the 100th anniversary meeting of the American Society of Colon and Rectal Surgeons (ASCRS) in 1999. Many other awards and honors have been bestowed on Dr. Corman throughout his career.

One of his most cherished was the John C. Goligher Memorial Medal of the Association of Coloproctology, Great Britain and Ireland, and the Section of Coloproctology of the Royal Society of Medicine. Dr. Corman has also been a named visiting professor at nearly 50 institutions throughout the world. In addition, he has served in many leadership roles, including Vice President of the ASCRS and President of the American Board of Colon and Rectal Surgery, and was Associate Editor of Diseases of the Colon and Rectum for 15 years.

Despite his still-busy schedule in the Stony Brook Department of Surgery, Dr. Corman finds time to indulge his love of reading, finishing two books a week on average. He is a fan of the works of Sir Arthur Conan Doyle and Charles Dickens, and anything by or about Winston Churchill. As for the seventh edition of Corman’s Colon and Rectal Surgery, now close to 2,000 pages?

Dr. Corman has offered the rights to the ASCRS at no cost, as long as it continues to be updated. “It’s a huge undertaking and it’s time to hand over the reins to someone else,” he says. Dr. Corman recently attended a reunion in Boston of “Five-Surg” alumni — “the dinosaurs,” as they jokingly refer to themselves. He was pleased to spend time with some 30 fellow surgeons of his era, including some giants in the field. “Our residency years were occasionally wonderful and often demanding,” he says, “but they helped shape who we became.”