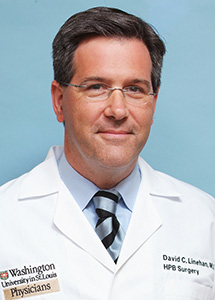 “I learned about a life of service and academic excellence."

Even as a teenager, Boston native David Linehan, MD, knew he wanted to be a doctor. His early career choice was influenced by his mother, who founded and ran a rehabilitation facility for men with alcohol and drug addictions, and the Jesuit high school he attended. From both, says Dr. Linehan, “I learned about a life of service and academic excellence.”

Service and academic excellence have always defined Dr. Linehan’s career. A 1997 graduate of the department’s General Surgery Residency Program, Dr. Linehan was recently named Chair of Surgery at the University of Rochester Medical Center, a position he assumes on October 1. He was formerly the Neidorff Family and Robert C. Packman Professor of Surgery at Washington University School of Medicine in St. Louis, where he worked since completing a surgical oncology fellowship at Memorial Sloan-Kettering Cancer Center in 1999.

Since 2007, Dr. Linehan served as Chief of the Division of Hepatobiliary, Pancreatic, and
Gastrointestinal Surgery at Washington University School of Medicine and Barnes-Jewish Hospital, where he maintained a high-volume clinical practice focusing largely on cancer patients. He was also Director of the HPB/GI Fellowship Training Program, one of the most
competitive such fellowships in the nation.

Dr. Linehan devotes nearly half of his time to translational research aimed at finding a novel,
effective treatment for pancreatic cancer, one of the deadliest malignancies. For the past 15 years he has focused on understanding the intricacies of the pancreatic tumor microenvironment.

This work led to his discovery that pancreatic tumors mobilize stromal cells from the bone marrow and that these cells, which suppress the immune response, play a key role in the growth and spread of tumors. “We hypothesized that if we could block these cells, we could reverse the immunosuppression and improve the effectiveness of chemotherapy,”
explains Dr. Linehan.

Using a drug called a CCR2 inhibitor, which prevents the mobilization of these cells from the bone marrow, Dr. Linehan and his team demonstrated efficacy in preclinical models. The drug is now being evaluated in patients with locally advanced pancreatic cancer. “It’s pretty exciting that a concept developed in our lab is now in [phase 2] clinical trials,” he says.

Last year, Dr. Linehan received a $1.25 million RO1 grant, “CCR2 Blockade in Human Pancreatic Cancer,” from the National Institutes of Health to take this research to the next level. And this year, he was named to a multi-institutional Stand Up To Cancer (SU2C) Pancreas Cancer “Dream Team” to further pursue this area of investigation.

Dr. Linehan’s commitment to all domains of academic surgery — patient care, teaching, and
research — was inspired by his experiences as a surgical resident. A graduate of Dartmouth College and the University of Massachusetts Medical School, Dr. Linehan is grateful to have trained under Glenn Steele Jr., MD, PhD. “Dr. Steele was a fantastic role model — a true triple threat: an outstanding administrator, researcher, and surgeon,” says Dr. Linehan. “He set a tone and standard that many of us benefited from.”

Dr. Linehan says he also benefited from the broad and diverse training and research opportunities offered by the BIDMC surgical residency, which he describes as the “best in Boston.” During his residency, Dr. Linehan spent two years in a research fellowship in tumor immunotherapy at Brigham and Women’s Hospital with Timothy Eberlein, MD.

Dr. Eberlein, who recruited Dr. Linehan to St. Louis, is now Chairman of Surgery at Washington University School of Medicine. Despite his packed schedule, which also includes serving in leadership roles in numerous professional societies and as an editorial board member of
JAMA Surgery, Dr. Linehan, a married father of two teenaged sons, still finds time to return to New England every year, where he enjoys visiting family, downhill skiing, fishing, and spending time at his summer home on the Maine coast. But even when he’s relaxing, Dr. Linehan’s goal — to find a better treatment or even a cure for pancreatic cancer — is never far from his mind.