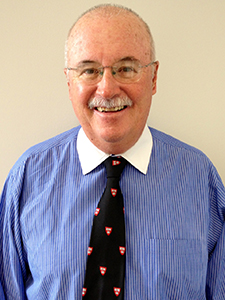 “Unquestionably the residency program, with its incredible mentors and combination of clinical experiences and research, jump-started my career in academic surgery.”

When Tom O’Donnell was 15, he suffered a fractured femur while playing football, an event that shaped the course of his entire life. His doctor was renowned Boston-area orthopedic surgeon Joseph Dorgan, MD, who also treated many members of the then-Boston Patriots. Impressed by Dorgan’s confidence, skills, and role, O’Donnell decided that he, too, wanted to become a surgeon.

Decades later, Dorgan sought out his former patient — now himself a renowned surgeon — when he needed treatment for a vascular condition, an experience Dorgan once wrote about for a magazine. “It was a privilege to treat this man who had been my role model,” says O’Donnell, Benjamin Andrews Chair of Surgery Emeritus at Tufts University School of Medicine and Director of the Vein Center at Tufts Medical Center in Boston.

It was during O’Donnell’s residency — which included a year in the Navy at the Beaufort Naval Hospital in South Carolina and a postgraduate year as a senior registrar at St. Thomas’ Hospital in London — that O’Donnell achieved what he still considers two of his most important contributions.

The first was his self-initiated research on heat-stress injuries among young Marines at Parris Island during training exercises, which led to Marine Corps policy changes that “impacted a lot of young men preparing for Vietnam and hopefully saved lives,” says O’Donnell. This research was published in 1972 in the New England Journal of Medicine, co-authored by another of O’Donnell’s residency mentors, George H.A. Clowes Jr., MD.

The second was the research he carried out with Clowes and George Blackburn, MD, PhD, on the effects of sepsis on metabolism. This work resulted in several influential publications, including one that earned O’Donnell the Association for Academic Surgery Resident Research Prize.

“Unquestionably the residency program, with its incredible mentors and combination of clinical experiences and research, jump-started my career in academic surgery,” says O’Donnell. He added that his decision to specialize in vascular surgery, and in particular venous disease, was also influenced by his mentors on “Five Surg” and during his stint as a senior registrar in London.

Following a clinical fellowship in vascular surgery at Massachusetts General Hospital, 37 years ago O’Donnell was recruited to Tufts-New England Medical Center (now Tufts Medical Center), where he has remained ever since. At Tufts, he has served in a wide range of senior leadership positions, including Chairman of the Department of Surgery and, from 1996 to 2004, Chief Executive Officer and President.

During all these years and whatever his role, O’Donnell has continued to make a lasting mark in all domains of academic surgery. For example, he developed several innovative treatments that have improved the outcomes for patients with venous disease; has authored more than 160 peer-reviewed papers and 62 book chapters; and has trained a long list of vascular fellows, many of whom hold leadership positions in academic surgery.

As he ponders the next phase of his long, illustrious career, O’Donnell plans to devote more time to clinical research and, he readily admits, his other passions: playing golf and spending time with his six grandchildren.