The physician-scientists in the Division of Cardiovascular Medicine are national leaders of key clinical trials to assess the safety and efficacy of new treatments for cardiovascular disease.

The ongoing clinical trials listed below are currently enrolling new patients. If a clinical trial is an appropriate option for you, your cardiologist will discuss details regarding possible participation and will explain the technical terms that may be found in the summaries below.

Arrhythmias are irregular heart rhythms that cause the heart to beat too slow, too fast, and/or in an uncoordinated manner. At the CardioVascular Institute, our Harvard-Thorndike Electrophysiology Institute and Arrhythmia Service treats patients with arrhythmias through a combination of medicines and procedures designed to improve heart function and patient symptoms.

Patients who are at a high risk for sudden cardiac death due to a serious arrhythmia are often treated with an implantable cardioverter defibrillator (ICD). Some patients can receive a subcutaneous ICD (s-ICD). An s-ICD is an ICD that is placed under the skin without any device accessories being implanted directly in the heart. It consists of two components: a generator that monitors heart rhythm and delivers a charge (shock) and a lead (wire) that carries the charge to the heart muscle. This study will evaluate whether placing the lead on the right side of the sternum, or breastbone, versus the usual left side may be just as effective; and whether it may reduce the amount of charge needed for successful defibrillation. This is a small feasibility study designed by the cardiology team here at the CardioVascular Institute.

Ablation treatment for ventricular tachycardia (VT) is typically done using unipolar (one catheter) radiofrequency (RF) ablation. For some patients, this method is not successful. The Bipolar Ablation study is examining the safety and effectiveness of using bipolar (two catheters) ablation to treat VT for patients in whom standard ablation was not successful. It is thought that using two catheters, one from  either side of the heart wall, during ablation will allow for successful termination of the arrhythmia in this patient group.

The coronary arteries are the large blood vessels that supply the heart muscle with oxygen-rich blood. In coronary artery disease (CAD), these vessels become blocked. CAD typically builds up over decades, is the most common form of heart disease and is the leading cause of death worldwide. Patients with CAD may be treated in our catheterization lab where doctors will attempt to re-open blocked or narrowed coronary arteries. This is most often accomplished by placing a stent (a thin wire mesh tube) in the artery.

Patients who receive stents must take two antiplatelet medicines, aspirin plus a medicine such as Plavix, for a period of time after stenting. This is referred to as DAPT – dual anti-platelet therapy. Antiplatelet medicines prevent blood cells from sticking together, or clumping, thereby forming a clot within the stent during the time it is healing into the blood vessel wall.

At the CardioVascular Institute, we are involved in several studies looking at improving outcomes of patients with CAD through the use of next-generation stents and medicines.

Balancing the benefits of antiplatelet medications against the risk of bleeding is an ongoing issue that physicians encounter on a regular basis. The Evolve SHORT DAPT study is enrolling patients who are treated with a SYNERGY Stent and considered to be at a higher risk of bleeding. This study will evaluate the safety of a shorter duration of DAPT after stenting. The SYNERGY stent is a Food and Drug Administration-approved, drug-coated stent made by Boston Scientific Corporation.

Some patients may be maintained on anticoagulation for conditions other than arrhythmias.  Anticoagulants such as Coumadin thin the blood to prevent blood clot formation. Anticoagulants work differently than the antiplatelet drugs, and the two cannot usually be substituted for each other. As such, patients with stents may need to take multiple medicines that thin their blood—placing them at an even higher risk of bleeding. The COBRA-REDUCE trial includes patients with coronary artery disease requiring stenting who are also prescribed an anticoagulant. This study will evaluate the use of the COBRA PzFTM Coronary Stent with a shortened duration of DAPT in addition to the usual anticoagulant. The study stent—COBRA PzFTM—is a bare metal stent manufactured by CeloNova Biosciences and features a special coating designed to prevent blood clumping discussed above and to promote healing. The FDA recently approved COBRA PzFTM for commercial use. Patients are randomized to either the study stent with two weeks of DAPT or a usual care stent with 6 months of DAPT in addition to their prescribed anticoagulant.

Beth Israel Deaconess Medical Center is one of up to only 20 prominent hospitals nationwide participating in the OPTIMUM Registry. Patients with severe coronary artery disease who are considered ineligible for coronary bypass surgery due to a high risk for major complications are included. These patients may be treated with stenting or with careful medical management alone. The OPTIMUM Registry is gathering data about these patients from a network of up to 20 leading hospitals across the country. The OPTIMUM investigators seek to address current gaps in knowledge regarding treatment for patients with severe CAD. A Registry is a type of research that generally gathers existing information and does not change a patient’s treatment plan.

Heart failure is a chronic condition that can usually be treated, managed and sometimes cured. Heart failure does not mean that the heart has stopped working. It means that the heart has weakened or become too stiff to pump enough blood to meet the body's needs. This may cause fluid build-up in the lungs, swelling of the feet and legs, shortness of breath and/or fatigue. At the CardioVascular Institute, we seek to improve outcomes of patients with heart failure through the use of new medicines, procedures and management strategies. 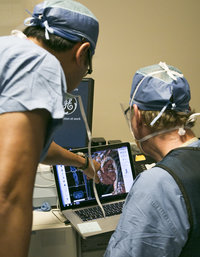 Heart valves are tissue-thin membranes that attach to the heart wall and constantly open and close to control the flow of blood through the heart. When there is a narrowing of the opening of your aortic valve, this is called aortic stenosis (AS). This forces the heart to squeeze harder to pump sufficient blood throughout the body. While this can be treated through open heart surgery, some patients may be at high risk for surgical complications. Within the past few years, the Food and Drug Administration has approved an alternative treatment option for patients with severe AS. This is called Transcatheter Aortic Valve Replacement (TAVR). TAVR allows physicians to replace a diseased valve using a catheter (a long flexible tube) through a small incision in the groin. This method can result in a lower risk for procedure related complications and faster recovery time for higher-risk patients.

At the CardioVascular Institute, we treat AS patients considered to be at higher risk for surgical complications with FDA-approved TAVR devices on a regular basis. Currently we are investigating treatment with TAVR in different patient risk populations. We are also participating in an important trial to determine the best medicines to be used after TAVR.

The Medtronic CoreValve Low Risk trial is a study designed to determine whether patients with severe AS who are considered to be at low risk for surgical complications have the same or better outcomes as those treated with usual care open heart surgery – Surgical Aortic Valve Replacement (SAVR).  Participants will be randomized, or chosen by chance, to either to treatment with either SAVR or TAVR using a Medtronic CoreValve/Evolut R device. Patients will be followed for 10 years to fully evaluate long term outcomes in this population.

Influenza infection (“the flu”) is known to be associated with a higher risk of complications with patient having heart disease. The INVESTED study will assess whether the high-dose flu vaccine is able to safely reduce heart or lung-related problems compared to the standard-dose flu vaccine in patients who have had a heart attack or have heart failure. Both the high dose and standard dose flu vaccines called Fluzone® are being provided for use in the study by Sanofi Pasteur, which manufactures the vaccines. Typically the high dose vaccine is reserved for patients at least 65 years of age. Participants will be randomized, or chosen by chance, to receive either the standard dose or high dose Fluzone vaccine. Patients will receive the same dose annually for up to three years during the course of the study.