Open Hearts - One Woman's Journey from Heart Surgery to Motherhood 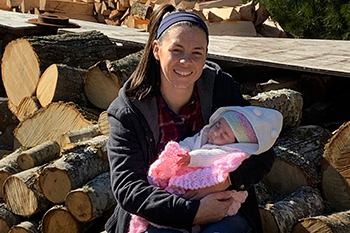 Cassidy Grace Costa weighs seven pounds, three ounces and has a shock of thick dark hair. She is six weeks old and resting comfortably against Amanda Costa's chest, soothed by her mom's steady heartbeat. It's hard to believe that Amanda underwent open heart surgery only four years ago.

Today, mother and daughter have made the trip to Boston from their home in Rochester, Mass., near Cape Cod. For Amanda, this was the latest in a series of visits with a team of cardiovascular and neonatal medicine specialists from Beth Israel Deaconess Medical Center who have helped manage her health — before, during and after pregnancy. "I know I'm in the right place at BIDMC," says Amanda.

Born with a bicuspid aortic valve, Amanda knew that over time, her condition would impede her heart's ability to effectively pump blood to the rest of the body. In 2016, she learned that she needed open-heart surgery.

"Because of my health history, I knew the day would come that my aortic valve would need to be replaced, but it was sooner than I expected," says Amanda, who was 26 at the time she received the diagnosis. She and her husband Jeff had been married just under two years, and knew that they wanted to start a family.

The surprising news left the couple facing a series of important decisions. But first, they had a number of questions to be answered.

Amanda's cardiologist recommended she contact Kamal Khabbaz, MD, BIDMC Chief of Cardiac Surgery. It was agreed that Amanda's heart surgery was needed right away and that starting a family would have to be briefly put on hold. Dr. Khabbaz guided her through options, including what type of heart valve would be best and, following her surgery, introduced her to an additional support team of physicians including Loryn Feinberg, MD, director of the Women's Cardiovascular Health Program and Scott Shainker, DO, a specialist in BIDMC's Division of Maternal Fetal Medicine.

In April 2016, Dr. Khabbaz replaced Amanda's aortic valve. "Everything went really well," says Amanda, who made a smooth recovery and soon returned to work as a senior engineer for a Rhode Island-based defense contracting company. "I then needed a year to fully heal before my husband and I could even begin making any serious baby plans," she adds.

In the fall of 2017, Amanda and Jeff met with Drs. Feinberg and Shainker.

"We wanted to check the strength of Amanda's heart," says Dr. Feinberg. "Pregnancy puts a lot of stress on a mother's body, especially the cardiovascular system." Amanda underwent a rigorous series of cardiac tests, including various echocardiograms, CT scans, and an MRI, in addition to temporarily wearing a heart monitor. "Our goal was to assess Amanda's heart function, and measure stability," adds Dr. Feinberg. In the meantime, Amanda maintained a low-sodium diet, a strict walking regimen and a positive attitude.

In early 2019, Amanda and Jeff got the green light to begin trying to start a family. "Lucky us," says Amanda, "I got pregnant right away and our new journey began." Throughout her pregnancy Amanda was closely monitored by Drs. Feinberg and Shainker.

"Cassidy's birth was scheduled for 37 weeks, so that she would be fully developed and healthy, but wouldn't continue to grow too large, which would put more strain on my heart," says Amanda.

The big day arrived on December 18, 2019. Through the coordination of the Departments of Cardiovascular Medicine, Labor and Delivery, Maternal Fetal Medicine and Anesthesia, Cassidy was born via C-section at 3:15 pm. "We spent five days in the hospital and Cassidy and I were home in time for Christmas," says Amanda. "Our family couldn't have imagined a better gift."