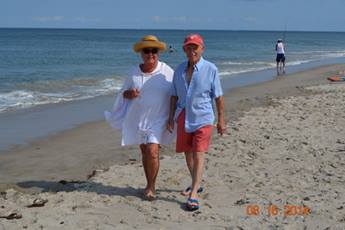 Paul Jodice’s boundless enthusiasm applies to biking, playing tennis, golfing, spending time at the beach with his family and many other ways of enjoying life.

It’s hard to believe less than a year ago, this vibrant 73-year-old man with the contagious smile learned he had cancer. Not just any cancer, but pancreatic cancer, one of the most challenging kinds, involving a tumor that virtually all in the medical community would have deemed inoperable.

With his doctor, Jodice, who was already a colon cancer survivor, had been closely monitoring two cysts on his pancreas for about eight years. Most pancreatic cysts aren’t cancerous, and are assessed for any changes with periodic imaging tests. Last October, an MRI revealed that one of Jodice’s cysts had grown significantly since his last appointment, so a biopsy was scheduled.

“It was a beautiful fall day, and I just got home from playing a great game of tennis,” Jodice recalls. “My wife said the doctor called to discuss the results of the biopsy, and immediately I thought, ‘uh-oh.’ ”

When Jodice returned the call, he heard the words he feared. He had pancreatic cancer--a stage three tumor.

A Program that Specializes in Difficult Cases 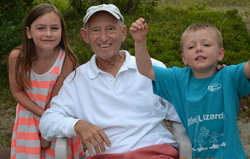 Jodice turned to the Pancreatic Cancer Center at Beth Israel Deaconess Medical Center, which specializes in difficult cases like his. Providing a truly multidisciplinary approach for patients with pancreatic cancer, the program brings together a world-class team of doctors in the pancreatic cancer disciplines: gastroenterology, medical oncology, pathology, radiation oncology, radiology and pancreatic surgery.

“The pancreas is closely integrated with other organs and large blood vessels,” explains A. James (Jim) Moser, MD, a surgeon with the Pancreatic Cancer Center and Co-Director of BIDMC’s Pancreas and Liver Institute. “Unfortunately, the location of many cancerous tumors is often a reason that patients are told they are ineligible for surgery, when in fact potentially curative treatment is still possible.”

Moser recalls, “When Paul first came to us, he presented as a classic patient with an advanced tumor, but we were confident that our multidisciplinary team could treat him with a combination of chemotherapy, radiation and surgery.”

Because surgery is the only real cure for pancreatic cancer, the team developed a plan designed to make surgery possible by quickly shrinking his tumor. They recommended chemotherapy, then a special kind of radiation.

Jodice received two months of chemotherapy with FOLFIRINOX, a combination of four different cancer drugs. Next he underwent an endoscopic procedure by gastroenterologist Mandeep Sawhney, MD, to insert tiny gold marker seeds in his tumor. These markers would help guide a stereotactic radiotherapy system, CyberKnife, to deliver highly focused therapeutic radiation directly to the tumor.

Mancias directed Paul’s CyberKnife therapy during three days in February. The majority of CyberKnife treatments are completed in one to five sessions of about 90 minutes each, compared to conventional radiation therapy that may require weeks of daily sessions with more side-effects. BIDMC radiation oncologists were the first and remain the most experienced clinical team in New England to offer CyberKnife therapy.

Jodice tolerated the treatments well. Just a month after completing chemotherapy and CyberKnife therapy, a CT scan revealed Jodice’s tumor had shrunk enough for him to undergo surgery. His surgery date with Moser was scheduled.

“From the beginning, Dr. Moser told us the tumor was in a very difficult location due to the involvement of large blood vessels,” says Jodice. “But he said he would get it out.”

The path to success would not be easy. Jodice’s surgery was extremely complex. He had open “Whipple” surgery and his portal vein, through which blood moves from the spleen and gastrointestinal tract to the liver, was removed and replaced. Moser and his team worked 11 hours to remove the entire tumor while saving 50 percent of Jodice’s pancreas.

The final pathology report showed no remaining evidence of cancer in the pancreas. Pathologists call this a “complete pathological response.” In the pancreas cancer world, Jodice had hit a hole in one.

“Now with treatment given to patients as a first step before surgery for pancreatic cancer, we are seeing amazing results with very little or even no residual tumor on microscopic examination,” says Gamze Ayata, MD, Jodice’s pathologist. “This is very new, promising and significant.”

Jodice experienced a lengthy recovery at BIDMC due to heart issues, then received another three months of intensive chemotherapy treatment as planned.

“Thank goodness I was active and in good condition before this all happened,” Jodice says.

Less than a year after his diagnosis, Jodice is cancer-free and doing the things he loves. Many would have said this wasn’t possible.

“Now our pancreatic cancer patients are celebrating more birthdays, and enjoying a normal quality of life,” says Moser. “We’re achieving remarkable results and making the impossible possible by closely collaborating with specialists in each relevant discipline, coordinating care and aggressively fighting the tumors.”

At a recent follow-up appointment, Neeharika Srivastava, MD, Jodice’s medical oncologist, asks, “How have you been doing since I saw you last?”

Jodice immediately knocks on the (wooden) desk, smiles, and tells her he rode a bike the other day, played a few holes of golf and is just getting back to his tennis game, too. Best of all, he is spending a lot of time at the beach house with family.

“Now you can take your wife out to dinner, go dancing and you’re not going to get sick,” Srivastava says. “Make sure you eat a normal, healthy diet so your white blood cell count continues to go up.”

As soon as the appointment ends, Jodice and his wife hit the road and head straight to Humarock Beach, hoping for a run of good weather. The sun and the blue sky are bright.