Jeffrey North and his wife Diane had been dreaming about a month-long vacation from winter in Falmouth, Mass., to an apartment they rented in Long Boat Key, Fla. However, halfway into their stay, North became sick with diarrhea and jaundice, and his whole body itched. He could barely leave the bedroom for the rest of the vacation. 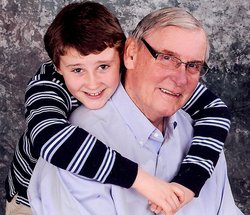 Tests at BIDMC revealed a mass in his pancreas and a biopsy confirmed that North had pancreatic cancer.

“When you first hear the words ‘pancreatic cancer,’ little danger flags fly 5,000 feet up in the air,” recalls North. “You immediately think it’s a death sentence; how long do you live?” 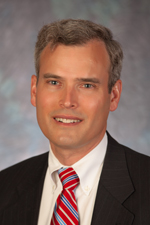 “There is no screening for pancreatic cancer. It is a silent disease until symptoms appear,” explains A. James (Jim) Moser, MD, (right), a Pancreatic Cancer Program surgeon and Co-Director of BIDMC’s Pancreas and Liver Institute. “By the time symptoms appear, many patients are at an advanced stage, but with the right care, pancreatic cancer can be treated as a chronic disease and patients can live fulfilling lives.”

North was already coping with a chronic heart condition, aortic valve stenosis, and was being closely monitored by a cardiologist. Aortic valve stenosis is a narrowing of the heart’s aortic valve that prevents it from fully opening, so the heart has to work harder to pump blood through the body. Eventually, the amount of blood it can pump diminishes, and the heart muscles may weaken, leading to serious heart problems.

Moser was confident he could remove North’s tumor. This would be the first step in aggressive treatment for pancreatic cancer, followed by chemotherapy. North’s cardiologist determined that his heart was strong enough to undergo the surgery and Moser successfully removed his tumor.

Once North recovered from surgery, he began a long and difficult chemotherapy regime. But, then his chronic heart condition flared up.

“There is a long list of side effects that could happen as a result of undergoing chemotherapy and I had all of them,” says North, “but I hung in there. Then, my heart issue reared its ugly head.”

One winter day, he experienced difficulty breathing. His Falmouth cardiologist sent for an ambulance to take him to BIDMC, knowing he needed a heart valve replacement soon.

However, he wasn’t a candidate for heart surgery because his body was still recovering from the effects of chemotherapy. His medical team was also concerned that his cancer might return too quickly for heart surgery to be beneficial. Instead, North had another medical procedure, cardioversion, in which a specialized cardiologist delivered an electric shock to this heart and restored its normal rhythm. He went home a few days later.

Every three months, North met with a member of his medical team for close monitoring, periodic imaging and scans. He regained his strength and started to feel better every day. Furthermore, there were still no signs of any tumors in his pancreas.

Then, one day, a small lung tumor appeared on a scan. It was too small to biopsy, and the medical team agreed they would monitor it very closely. When they eventually concluded it wasn’t growing, North and his team revisited the heart surgery issue.

“Dr. Moser asked me if I felt as good as I looked,” recalls North. “When he heard my resounding positive answer, he recommended I get the valve replacement surgery behind me.” 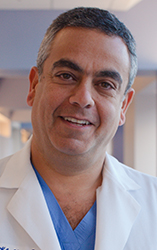 Now North’s heart, and not his cancer, was the life-threatening issue. His team of specialists concluded he was well enough to address it, and that the time had come.

“His risk of mortality due to the heart disease was higher than the risk from pancreatic cancer,” says Kamal R. Khabbaz, MD, (right), Chief of Cardiac Surgery at BIDMC. “He already proved he is a survivor, and we determined that he could withstand open heart surgery at low risk and greatly benefit.”

Khabbaz and his team successfully performed the aortic valve replacement on North. He recovered well, and just a month later returned to seeing his team of cancer specialists every few months.

North has received great reports. He is currently in a holding pattern, and the tumor marker tests have all gone down. He continues to build up his heart and get back in shape. Five days a week in summer, he swims for an hour right in his backyard--Buzzards Bay.

When North was first diagnosed with pancreatic cancer, he composed a bucket list of must-do experiences. He traveled extensively, including to Disneyland and Mexico, with his wife, children and grandchildren. He is making plans to return to Long Boat Key for not just one, but two months, next winter.

“A majority of our pancreatic cancer patients learn quickly that we treat the disease as chronic—not deadly,” says Moser. “Even when you have pancreatic cancer, your quality of life can remain excellent. It is quite possible, and common, for our patients to celebrate more birthdays, and, in Mr. North’s case, to go away on many more vacations.”