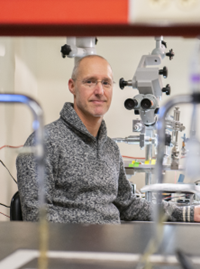 Dan Levy's research group is interested in addressing the function of the nociceptive sensory system that innervates the cerebral meninges as well as mechanisms that contribute to its activation, which is considered paramount for the genesis of headaches, such as migraine.

Headache is one of the most common types of pain, yet our understanding of why and how different types of headaches emerge remains incomplete. Acute cases of headache may be the result of a homeostatic response to an abnormal physiological condition, such as the exposure to high altitude, or excessive alcohol consumption (alcohol hangover) and are often reversible. However,neurological disorders such as migraine involve recurrent headaches that are difficult to treat and carry an enormous burden for individuals and societies due to their high prevalence, significant disability, and considerable economic costs. A major hurdle to the development of novel, evidence-based treatments for these headache conditions is the poor understanding of their underlying pathology. The major goal of the Levy lab is to define the mechanisms underlying the onset of headaches that are vital for the development of therapeutic approaches for prevention of the onset of headaches.

To address this fundamental question, research in the Levy lab focuses on the intracranial meninges (the dura, arachnoid and pia mater layers that cover and protect the brain) and its sensory innervation - the peripheral neuronal population whose activation has been most directly implicated in the genesis of headaches. The responses of meningeal sensory afferents are being studied using in vivo extracellular single-unit electrophysiology in anesthetized animals, as well as in awake animals using a state-of-the-art two-photon calcium imaging approach. To decipher the triggering mechanisms of headache, the Levy lab combines these approaches with pharmacological and genetic tools to investigate key cellular and molecular processes that modulate the responses of these headache-producing neurons under conditions that have been linked to headache genesis in humans.

Studies of the mechanosensitivity of meningeal sensory neurons are of particular importance to better understand the mechanisms underlying the exacerbation of certain types of headache (e.g. migraine) during physical activities, such as climbing stairs. Dr. Levy and colleagues already identified several endogenous mediators and intracellular signaling cascades (e.g. cAMP-PKA, NO-cGMP, pERK) that contribute to the enhancement or inhibition of these sensory neurons. Dr. Levy’s team further revealed the role of meningeal immune cells (i.e. mast cells, which are also implicated in allergies) as key endogenous factors that can lead to the activation and increased mechanosensitivity of the meningeal sensory system and also identified the inhibition of meningeal afferent responses as a key mechanism that contribute to the headache abortive properties of a key over-the-counter analgesic, naproxen.

To study specifically mechanisms underlying migraine headache, the Levy lab employs different triggering models, including cortical spreading depression (CSD), and systemic administration of nitroglycerin. They also investigate mechanisms of post-traumatic headache, by studying the effects of mild closed head injury, a model of mild brain injury, or concussion. They also use behavioral assays of pain hypersensitivity, such as measurements of cephalic mechanical hypersensitivity, as well as novel approaches to assess headache and migraine-like behaviors in rodents, such as changes in wheel running, open field behavior, and grimacing.

This project addresses the mechanisms underlying the origin of the headache in migraine with aura. In these attacks, which occur in 20- 30% of migraine sufferers, the headache is preceded by visual disturbances or other abnormal sensory perceptions that are thought to occur as a result of aberrant cortical process known as CSD - a wave of excitation of cortical neurons with associated glial and vascular responses, that is followed by a prolonged inhibition of cortical and impairment of vascular reactivity. The Levy lab has shown previously that a single CSD event is sufficient to promote prolonged activation and increased mechanosensitivity of meningeal nociceptive afferents (Zhao and Levy, 2016). They also identified recently that these headache-promoting neural responses are mediated by distinct processes, likely involving cyclooxygenase metabolites and k(ATP)-related signaling, but not CSD-evoked metabolic perturbations (Zhao and Levy, 2018), or activation of the CGRP receptor (Zhao and Levy, 2017). Current studies continue to characterize the cortical-meningeal pain signaling that enhance the responses of meningeal nociceptive afferents following CSD and focus on the role of cortical glia signaling.

Headache is one of the most common symptoms after mild traumatic brain injury (TBI), such as a concussion. The origin of post-traumatic headache (PTH) remains unclear however, primarily due to the paucity of animal models and related preclinical research. The long-term goal of the Levy lab is to decipher the mechanisms of PTH origin and chronification, by focusing on the responses of the meninges and the meningeal nociceptive sensory system. Using rodent models of mild TBI evoked by mild closed head injury, studies in the Levy lab recently characterized important PTH-related acute and chronic behavioral pain phenotypes and demonstrated the involvement of Calcitonin-Gene Related Peptide (CGRP), a an important sensory signaling molecule that plays a role in migraine triggering (Bree and Levy, 2018). The cerebral meninges are ideally located to act as an immune gatekeeper for the underlying brain parenchyma and meningeal inflammatory changes could play a role in the genesis of PTH following a brain injury. Indeed,the Levy lab also demonstrated recently a prolonged meningeal proinflammatory event, involving persistent activation and release of mediators (degranulation) of mast cells in our concussion model and further observed the involvement of these proinflammatory effector cells in mediating a persistent feature of PTH – persistent hypersensitivity to headache triggers (Bree and Levy, 2019). Although TBI is considered to be more prevalent in males, emerging evidence also points to increased concussion rates and PTH in young females, particular in relation to sport activity. Dr. Levy's lab, therefore, also investigates potential gender differences in the emergence of PTH in the concussive head injury model and responsiveness to therapies.

Back to Anesthesia Research