From Mouse to Human: History

APL as a novel paradigm for experimental therapeutics

Acute promyelocytic leukemia (APL) is associated with the accumulation in the bone marrow of tumor cells with promyelocytic features and the invariable association with specific reciprocal chromosomal translocations involving the retinoic acid receptor α (RARα) gene on chromosome 17. In the vast majority of cases (>98%), the RARα gene fuses to the promyelocytic leukemia gene, PML. In a small subset of cases, RARα has been found to fuse to several other genes that have recently been identified (such as PLZF) leading to the generation of X-RARα and RARα-X fusion proteins. 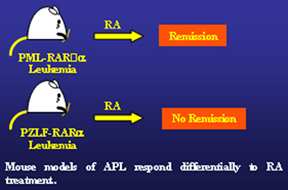 APL models in the mouse were not only faithful to the biology and pathological features of the human disease, but also their leukemias behaved exactly as APL in human patients when challenged with drugs.

For instance, APL in PML-RARα transgenic mice responds well to retinoic acid therapy. Precisely as in human APL, RA was able to induce complete remission in the mouse; but leukemia would eventually and inevitably relapse if treated with RA alone. In addition, leukemias in APL PML-RARα  mouse models would often become RA-resistant as is the case for human t(15;17) APL, involving PML and RARα gene, treated solely with RA. Furthermore, it was also demonstrated that exactly as in human t(11;17) APL, involving the PLZF and RARα gene, leukemia in PLZF-RARα mice was found resistant to RA at presentation.

Following on, mouse models of APL began to inform clinical trials in place. Simply put, it was possible to advise the clinicians on how to stratify patients for clinical trials on the basis of genetic criteria, using information accrued in preclinical testing of mouse models of APL. As an example, it has been demonstrated that leukemia in PML-RARα mice was extremely responsive to As2O3 (which later on proved to be another powerful weapon for the treatment of APL), while once again leukemia in PLZF-RARa mice was found to be resistant. From then on t(15;17) APL was treated successfully with As2O3, while t(11;17) APL patients were not. 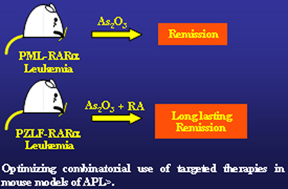 On the basis of these examples, novel therapeutic modalities could be tested as well as combinatorial treatments were optimized by utilizing these APL mouse models as a preclinical predictive engine toward APL eradication. . A decisive home run in this respect was the realization that As2O3 and RA in combination were tremendously effective in PML-RARa leukemia in the mouse.

On the basis of these convincing results, clinical trials combining both As2O3 and RA were subsequently performed in many academic enters in China, Europe and eventually in the U.S. Today, the As2O3 and RA combination is considered the standard of care in the treatment of t(15;17) APL. These two drugs specifically target the PML-RARa fusion protein by opposing its aberrant transcriptional activity and targeting it for degradation. As2O3 and RA are offered at presentation to t(15;17) APL patients as front line therapy with limited toxicity, in the absence of chemotherapy as induction or consolidation treatment. With these two drugs, curative complete remission is obtained in 100% of cases leading to disease eradication. Hence, the "targeted therapy devoid of chemotherapy" of APL has come of age. Once again, the preclinical effort in the mouse decisively informed and predicted clinical outcome.

In spite of the remarkable success for the treatment of t(15;17);PML-RARa APLs, the subtype of APL associated with PLZF-RARa fusion proteins remained nevertheless a very resilient subtype of APL, maintaining resistance to conventional chemotherapy as well as to RA and As2O3.. However, mouse models of t(11;17) APL have been successfully used to devise and test novel therapeutic modalities for therapy resistant APL that has lead to the approval from the FDA to test in therapy resistant human APL a combination of an HDAC inhibitor and RA.

APL is now considered eradicated and, as per today, 100% of patients attain complete remission and remain in durable remission off treatment with the sole use of combinatorial targeted therapies. Overall, APL represents the paradigm of how through preclinical studies in mouse models we can gain a substantial knowledge as to which therapies are efficacious and to which degree the molecular basis for human disease dictates the response to therapy. 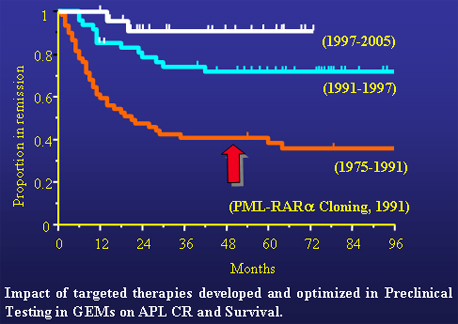