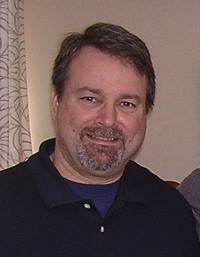 My story starts at 37 years old, when I was originally diagnosed with kidney cancer. I'd been married for 15 years, had kids ages 13 and 10, and was hard at work establishing a career. The last thing I ever expected was a cancer diagnosis that was made more shocking by the fact that my grandmother had kidney cancer in the early 1970s. Since all the staging tests indicated that the tumor was encapsulated within the kidney, the suggested treatment was a radical nephrectomy, which was completed successfully at a hospital near my home in New Hampshire.

After recuperating at home for eight weeks, I returned to work and picked up my life where it left off. Living with the uncertainty concerning my future health led me to live more for the present than I ever had before. I changed jobs a couple of times for better opportunities, did some traveling with my wife and kids, and bought the big house with a pool we'd been thinking about. The only reminders of my disease were a long crimson surgical scar and annual CT scans.

It was after one of those annual scans, when I was 40, that they detected several small and two large nodules in one lung. My physician called me with the news on a Friday night, at the very start of our summer vacation. He told me he'd get back to me on Monday with the next steps and suggested that I not think the worst, that it might be nothing. Despite his best efforts, I spent an extremely restless weekend. So, among day trips to the mountains, Boston, and whale watching, I spent a day during that vacation at the hospital for a biopsy on the nodules. The biopsy confirmed that the kidney cancer had metastasized to my right lung.

That news was devastating, since the discussions I'd had with my urologist three years earlier indicated that traditional chemotherapy was not an effective treatment for metastatic kidney cancer. At the time, I didn't think there was anything that could be done for me. But, my New Hampshire oncologist referred me to the Biologic Therapy team at Beth Israel Deaconess Medical Center, and my prospects improved considerably.

I met with the team doctors at BIDMC, who discussed available treatment options and ongoing clinical trials that I'd be eligible to participate in. We soon settled on high-dose Interleukin-2 treatment, and I chose to participate in a clinical trial of the cytokine inhibitor CNI-1493. After tests to confirm my suitability for treatment and a few days to baseline my reaction to the trial drug, I began the first of four courses of high-dose IL-2.

The treatment side effects were considerable, but I was well cared for by the BIDMC staff, who have years of experience with high-dose IL-2 patients. I was very fortunate that my wife was able to spend every day with me in the hospital. Her presence was a big help and a huge comfort to me.

The CT scan following the second course of treatment showed significant tumor shrinkage, and some of the smaller tumors had disappeared entirely. The news after the fourth course of treatment was even better, complete response with no sign of cancer remaining. I'm 51 now and my cancer has been in complete remission for more than 10 years. They do amazing work at BIDMC, and I wouldn't be alive today if it weren't for the high level of care I received here.