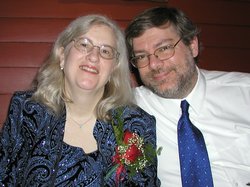 Bill Giuffre, of Arlington, MA, was 50 when he was referred to the Cancer Center at BIDMC with a Stage IV tumor of the kidney. At the time of his admission, metastases were detected across multiple sites in his brain and bone tissue. Under the care of David F. McDermott, MD, Co-Director of the Kidney Tumor Program and Director of the Biologic Therapy Program, Giuffre successfully underwent chemotherapy, surgery and radiation treatment.

Despite a grim prognosis giving him just weeks of survival from the time of his diagnosis, the combination of therapeutic modalities prolonged and improved his quality of life. Giuffre’s wife, Fran (above, left, with Bill), credits the Cancer Center’s multi-disciplinary team with holding off the disease and improving her husband’s well-being for an additional year.

“I had seen Bill go through a really awful disease but he was helped by hundreds of people, doctors and nurses as well as behind-the-scenes people,” she says. “I wanted to make Bill’s life, and this thing that happened to him, more meaningful by putting resources in the hands of people who are trying to help patients with kidney cancer.”

Fran Giuffre established the William L. Giuffre Kidney Cancer Research Fund with a $100,000 gift to underwrite the cost of a full-time research fellow and associated laboratory resources. The fellow’s work will take place under the auspices of the Cancer Center’s existing SPORE (Specialized Program of Research Excellence) grant, sponsored by the National Cancer Institute (NCI). The program investigates a range of methods for targeting kidney cancer, including blocking angiogenesis, modifying the immune system and inhibiting specific cancer-related molecular pathways.

“There are maybe 50 SPORE grants in the US and only one for kidney cancer, which we head up here,” says McDermott (above right).

The Cancer Center is the lead site for the region’s Dana-Farber/Harvard Cancer Center kidney cancer program. It fosters collaboration among BIDMC’s Kidney Cancer Program clinicians and other national experts in renal cancer. Together, their aim is to improve the outcome for what NCI forecasts will be more than 65,000 new cancers of the kidney and renal pelvis annually, resulting in some 13,000 deaths.

SPORE grants involve both basic and applied science and support projects aimed at developing new ways to prevent, detect, diagnose and treat a variety of human cancers. A key element of the program is to promote collaborative, interdisciplinary translational cancer research, or what Dr. McDermott describes as “bench to bedside” investigations: “Trying to learn, from human tissue, how we can improve treatments and put them into clinical practice quickly.”

An important area of progress emerging from this work has been the ability to harness the body’s immune system for targeting solid tumors with a class of drugs known as PD-1 inhibitors. These agents act on a natural pathway that normally shuts off disease-fighting T-cells. By blocking this shut-down, PD-1 inhibitors induce T-cells to help fight cancer cells more effectively. The Cancer Center is actively studying this mechanism as a means of treating kidney tumors.

Fran Giuffre is gratified to think that her gift will play a role in future research.

“When someone passes away suddenly, you have different financial resources available to you -- that you really don’t want to have -- but they’re there,” she says. “I can’t have Bill back. But I knew that Bill’s life would have more meaning in helping the hospital out this way. This is like putting some of Bill back into the world.”