Research over the past years has illustrated protean biologic effects of ATP, ADP, and adenosine-mediated signaling. These mediators function through the activation of G-protein–coupled or ligand-gated ion-channel receptors. Adenosine is derived from ATP and ADP through the actions of enzymes such as CD39 and family members on cellular surfaces, which also express the receptors for these mediators. Since the receptors of ATP and ADP and the receptors of adenosine often transduce opposite effects, the resulting cellular response is attributable to both the ratio of ADP and ATP to adenosine concentrations and the relative levels of expression and signaling intensity of the respective receptors.

The Robson laboratory, headed by Simon Robson, MB, ChB, FRCP, PhD has studied the functional roles of purinergic signaling in inflammatory diseases. The focus has been on the contribution of disordered inflammatory responses as modulated by ectoenzymes of the CD39 family to the fundamental mechanisms of acute and chronic disease. Specifically, CD39 has important functions in down regulating inflammatory processes and modulating innate immune responses within transplanted organs and at sites of inflammation in the liver and gastrointestinal tract. Research originally focused on the vascular biology of transplantation has extended to include innate immunology, adaptive cellular responses and tissue remodeling of the liver and gastrointestinal tract (as in hepatitis, cirrhosis and IBD). In the liver, CD39 is a crucial factor in vascular sinusoidal cell functionality and is important in the mediation of liver injury, and in further regulating liver regeneration and fibrosis (Fig. 1). In the gut, CD39 is an important anti inflammatory factor and low level expression ascribed to genetic polymorphisms in patients has been linked to IBD/Crohns disease.


Collaborations between the Robson, Strom and other laboratories have resulted in the key observations that the phenotype of T regulatory cells can be characterized by dual surface expression of CD39 and CD73 that operate in tandem to generate adenosine. Adenosine can be shown to be immune suppressive in both in vitro and in vivo systems. Other more recent work has shown that CD39 can be also expressed on regulatory T helper type 17 cells, NKT cells, dendritic cells and B cells and actively participates in immunomodulation at sites of inflammation.

High-level expression of CD39 using gene therapeutic modalities, following transgenesis or by infusion of soluble, pharmacologically active derivatives has salutary effects on both vascular injury, global inflammation as in colitis or hepatitis and also impacts graft survival. In contrast, inhibition of CD39 biological activity boosts immune responses and results in heightened anticancer responses and rejection of grafted tumors in mice.

The Robson laboratory also specifically addresses thrombotic abnormalities associated with alterations in coagulation and platelet reactivity in transplanted organs, including xenografts. The long-term strategy in collaboration with David Sachs, David Cooper and Peter Cowan has been to generate transgenic animals/pigs that over-express CD39 and other human thromboregulatory factors e.g. thrombomodulin, within the vasculature. This novel approach will test resistance of transgenic organs and islets to the thrombotic microangiopathic form of xenograft rejection in non-human primates. This work if successful may lead to possible, future clinical evaluations, potentially in vascularized and islet xenotransplantation. 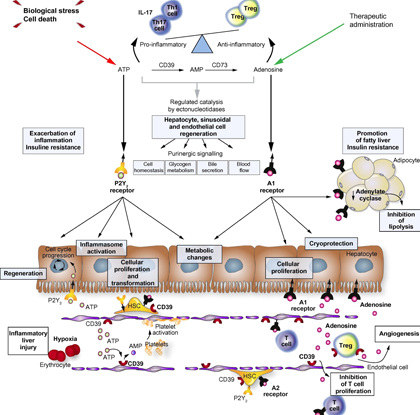 Legend: Schematic overview of the complex interplay mediated between extracellular ATP and adenosine by ectonucleotidases within the liver. As illustrated, purinergic signaling influences multiple cell types in the liver and in the hepatic sinusoids to impact processes of inflammation, metabolism and parameters of insulin signaling, cellular regeneration, healing, fibrosis and cell transformation.

As an example, extracellular ATP arising from biologic stress can incite hepatocytic inflammation mediated by P2X7 and the inflammasome, while driving parenchymal cell proliferation via P2Y2. With ATP metabolized to adenosine by ectonucleotidases expressed by non-parenchymal sinusoidal cellular surfaces, the inflammatory response is down regulated and tissue remodeling develops.

Induction of CD39 expression by immune suppressive T regulatory cells as well as endothelial cells with associated alterations in sinusoidal vascular responsiveness and hepatic stellate cell (HSC) responses. Heightened levels of adenosine generated over a protracted time may result in increased fibrosis, as formed by myofibroblasts and activated stellate cells.

These considerations and the crucially important levels of nucleotide:nucleoside balance controlled by CD39 have important implications for the development of purinergic therapies in liver transplantation and inflammatory fibrotic liver diseases.