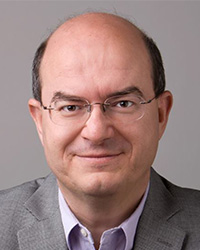 He currently serves as the Chief of Endocrinology, Diabetes and Metabolism at the Boston VA Healthcare System, where he created a leading academic division true to its tripartite mission and as the Director of Human Nutrition which he had created at Beth Israel Deaconess Medical Center (BIDMC), Harvard Medical School.

He has performed groundbreaking research in several areas of nutrition and metabolism. As some indices of his success to date, Dr. Mantzoros has published more than 1000 scientific papers i.e. 700 publications under his name in Medline in addition to more than 200 publications under the collaborative Look Ahead Research Group and more than 275 chapters and reviews or editorials. His corpus has received 145,000 citations with an H-index of 145 and an i10 index of 561 (Google Scholar).

Dr. Mantzoros has published as an editor two books (one on “Diabetes and Obesity” and one on “Nutrition and Metabolism” with more than two editions each). He has developed clinical programs and has presented at national and international meetings, has received enormous recognition in the field and currently edits the journal Metabolism (2-year impact factor 13.93; 4-year Cite Score 16.5, top 3% of Endocrinology and Metabolism journals, in contrast to lowest 20% when Dr. Mantzoros was appointed editor in chief). He is on the editorial board of several scientific journals. An outstanding clinician and prolific clinical investigator, Dr. Mantzoros has mentored a large number of people who have gone on to successful careers in academia. Dr. Mantzoros has mentored medical students as the Fellow of the Canon Society of Harvard Medical School, Master’s level students enrolled in the Scholars in Clinical Science Program at Harvard Medical School, Fellows as the BIDMC Endocrinology Fellowship Program Director, Faculty members as the Chief of Endocrinology at the Boston VA Healthcare System and has been a successful mentor with an active network of over 175 former/current mentees who trained in his Laboratory. Among the latter are 16 full Professors, numerous Associate and Assistant Professors, several Executives at pharmaceutical companies, two corporate CEOs, one Chief Scientific Officer and two Chief Medical Officers.

He has also received several competitive NIH awards for mentoring and has received recognition with awards from BIDMC and Harvard Medical School as well as various professional and academic societies nationally and internationally. He has applied for approximately 20 patents and has received several while others are still pending, has co-founded successful companies and has served as a board member, an advisor, or head of the scientific advisory boards of non-profit foundations as well as government and state agencies or commissions as well as for-profit private businesses and non-profit entities. Based on his many seminal contributions to the respective scientific fields, Dr. Mantzoros has been ranked as number 1 in the world in leptin and/or adipokine research, number 2 in adiponectin research, and in the top 0.1% of experts on obesity and NASH on ExpertScape, which objectively ranks scientists and institutions by expertise in more than 27,000 biomedical topics.

He is also among the highest 1% of cited investigators in terms of citations and H index. For his research discoveries and public health service, Dr. Mantzoros has received four honorary PhDs, several universities worldwide have awarded Dr. Mantzoros honorary professorships and visiting professorships and the International Hellenic University has named their Clinical Nutrition laboratories after his name. He has or is supervising PhD thesis work in several nations worldwide (USA, Sweden, Germany, Greece, etc.) and is actively collaborating with many research groups worldwide.

He has served as Associate Fellowship Program Director at BIDMC and later as Endocrinology, Diabetes and Metabolism Fellowship Program Founding Director at the Boston VA Healthcare System. He has taught courses at the undergraduate level, at the Medical School and at the postgraduate level and has directed and organized or co-organized several CME courses. He has also designed and/or organized training programs for medical trainees, pharmacy students and nursing students at the Boston VA Healthcare System. Dr. Mantzoros has been elected a member of ASCI and a Fellow of the American College of Physicians and the American Association of Clinical Endocrinology.