More Within Center for Virology and Vaccine Research 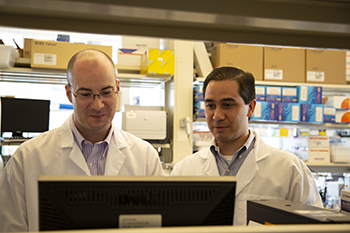 With 1.8 million new HIV infections per year, the world needs more than HIV drugs to end the AIDS epidemic. Today, researchers from the Barouch Laboratory within BIDMC's Center for Virology and Vaccine Research (CVVR) are testing a vaccine that may eradicate HIV.

Antiretroviral drugs have been a major success but will likely not end the AIDS epidemic. In order to drive real change, something different is needed. History teaches us that a safe and effective vaccine is the most powerful tool to end worldwide epidemics, such as the eradication of smallpox and the near-eradication of polio. Due to the complexity of HIV, only four HIV vaccine concepts have completed human efficacy testing since the first cases of AIDS were reported in 1981.

Dan H. Barouch, M.D., Ph.D., director of the CVVR and professor of medicine at Harvard Medical School, is an innovator in the field of infectious disease research. His research group and partners have developed a new HIV vaccine candidate that is currently being tested in humans. This vaccine candidate induces a robust immune response, and it has advanced into a large-scale Phase 2B human efficacy trial in Africa and a large-scale Phase 3 licensure efficacy trial in the Americas and Europe in partnership with the U.S. National Institutes of Health, the HIV Vaccine Trials Network, the Bill & Melinda Gates Foundation, Janssen, and other entities.

And this is not just for HIV/AIDS. Dr. Barouch's vaccine research platform for HIV also enables his team to respond rapidly to other new and emerging infectious diseases. In 2016, when the World Health Organization declared the Zika epidemic a public health emergency of international concern, his team developed and tested three Zika vaccines with unprecedented speed. In the first-ever demonstration of Zika vaccine protection in pre-clinical studies, all three vaccine candidates provided 100 percent protection and were rapidly advanced to human clinical trials.

His team is also applying the research platforms to a growing range of other pathogens and emerging epidemics—including tuberculosis, dengue virus, West Nile virus, and pandemic influenza.