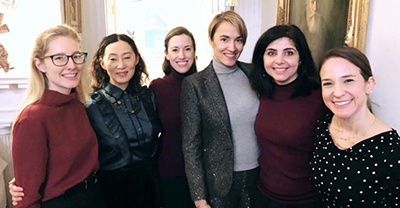 Dr. Rand Nashi graduated from the University of Massachusetts Medical School in 2016 and completed her Internal Medicine residency at Boston Medical Center. Academic interests include health care disparities, particularly with respect to race and gender, and advocacy for improvement of health care access. Her personal interests include playing with her dog, painting, and dancing.

Dr. Rubio was born and raised in Guayaquil, Ecuador. After obtaining his medical degree at the University of Guayaquil in Ecuador, he completed Internal Medicine Residency at MetroWest Medical Center in Framingham, MA, a community hospital where he served a diverse population, working to reduce disparities in care among vulnerable patient populations. During his residency training, he collaborated with the Division of Rheumatology at Boston Medical Center, evaluating the correlation of senescence biomarkers in serum and synovial fluid in patients with osteoarthritis. Then, he served one more year at MetroWest Medical Center, as Chief Medical Resident, improving his skills as an educator. Currently he is interested in graduate medical education, teaching evidence-based medicine and patient-centered clinical/translational research. He enjoys outdoor activities, soccer, and cooking.

Dr. Abeles received her Bachelor of Arts from Cornell University and earned her PhD in cognitive neuroscience at City University of New York studying basic visual processing deficits in patients with schizophrenia. She received her MD from SUNY Downstate Medical Center, gaining experience in providing care to under-served populations. She completed residency in Internal Medicine at Beth Israel Deaconess Medical Center. During this time, she evaluated associations between SLE phenotypes and standard serological markers using the Lupus Center’s cohort and will be continuing with SLE research during fellowship. Current interests include neuroinflammation, and investigation of new serological biomarkers in SLE. In her free time, she enjoys sunshine, traveling, food, and conquering fantasy football.

Dr. Wade was raised in Vancouver, Canada and earned a Bachelor of Science from the University of Victoria. While obtaining her MD from St. George’s University, she participated in the Global Scholars Program in England and focused on health disparities in the developing world. She completed Internal Medicine Residency at the University of Connecticut in 2017 and stayed on as Chief Medical Resident. Academic interests include medical education, quality improvement, and outcomes-based research in inflammatory arthritis and connective tissue disease. In her spare time she enjoys traveling, soccer, and skiing.

Dr. Graef received her D.O. from the University of New England College of Osteopathic Medicine and then completed an Internal Medical residency at the Lahey Hospital and Medical Center (Burlington MA). Prior to her completing her D.O. and residency training, she worked as a Clinical Research Coordinator in Breast Oncology under the supervision of Dr. Steven Come at BIDMC. She is currently a member of our division as a Clinical Fellow in Rheumatology.

Dr. Vukelic received her M.D. from the University of Belgrade Faculty of Medicine and completed her Internal Medicine residency at the Wellstar Atlanta Medical Center. Prior to residency, she worked in Jane Salmon’s lab at Weill Cornell Medical College/Hospital for Special Surgery in NYC examining the interplay between the immune system and the nervous system and the possibility that neural networks influence immune responses and ameliorate injury in lupus. She is currently a member of our division as a Clinical Fellow in Rheumatology.