Better Screening and Treatment Can Lead to Improved Bone Strength

Margaret Ulmer relies on her hands for work. So the 59-year old concert pianist and Director of the New England Conservatory's summer program was immediately concerned when she tripped last July and used her hands to break her fall.

Margaret's diagnosis was correct, and not uncommon. Between 150,000 and 200,000 people suffer a wrist fracture every year in the United States. Their injuries are providing Beth Israel Deaconess Medical Center Orthopedic Surgeon Dr. Tamara Rozental with a unique opportunity to study screening and treatment for what some experts consider a major threat to public health in this country, osteoporosis.

Osteoporosis is a disease characterized by the loss of bone mass and bone tissue. It can lead to increased risk of fractures - especially to the wrist, spine and hip. According to the National Osteoporosis Foundation, an estimated 10 million Americans already have osteoporosis and nearly 34 million more are at risk for developing it. Women over age 50 are at the greatest risk, with a 40% chance of bone fracture related to osteoporosis. 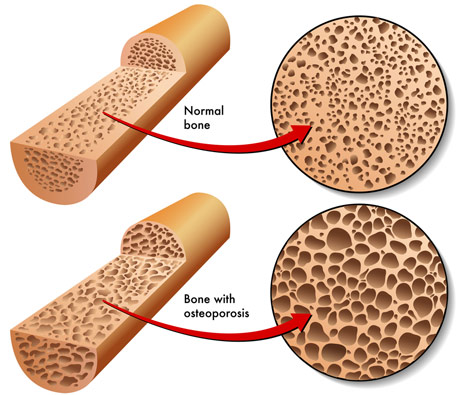 According to Dr. Rozental, wrist fractures are an independent predictor of a second fracture, meaning if you break your wrist, your chances of breaking another bone in the future increase substantially.

"Wrist fractures tend to present as the first fragility fracture in patients," says Dr. Rozental, "so they give us an opportunity to screen for abnormalities in bone density."

When Dr. Rozental's team reviewed screening rates for osteoporosis, they found only about 3 percent of women over 50 who had broken a wrist were given a bone density test by their physician, a rate Dr. Rozental calls abysmal.

Ordering the bone density test resulted in 93% of patients being screened, 100% discussing treatment with their PCP, and 86% of patients actually being treated for osteoporosis, a major improvement.

"This has basically changed our practice in this office," says Dr. Rozental. "We try to order a bone density test for patients who haven't had one for two years."

Margaret Ulmer's bone density test discovered she had osteopenia, an early sign of osteoporosis. The diagnosis was not a surprise for Margaret, whose mother suffers from severe osteoporosis. Her primary care physician is monitoring Ulmer's diet and calcium intake , and now that her broken wrist has healed, Margaret plans to increase her exercise regimen, a proven way to improve bone strength.

"I think I need to keep telling myself that taking some calcium pills and a bone density test is not enough," adds Ulmer.

And 9 months after her fall, Margaret Ulmer is back to playing the piano, performing back-to-back concerts at the conservatory this week with virtually no wrist pain.

"It felt fine," says Ulmer, "Two hours of playing with an intermission. It's nice to be back."

Find out if you are getting enough calcium and Vitamin D »