A Conversation with Richard Cummings, PhD

Dr. Cummings is an international leader in the rapidly emerging field of glycobiology, serving as Chair of the Consortium for Functional Glycomics, an international group of some 600 investigators.

Dr. Cummings is editor of Essentials of Glycobiology, the leading textbook in the field. Dr. Cummings leads the Center for Glycosciences at HMS, which is based in the BIDMC Department of Surgery.

In this interview, Dr. Cummings talks about glycobiology and his goals for the new center.

A : Glycobiology involves the study of the structure, biology, evolution, and function of glycans — chemically linked chains of sugars, or carbohydrates. Glycans are widely prevalent throughout nature and are present in all our cells, connective tissue, and bodily fluids. They play an essential role in how our cells work and, therefore, virtually all aspects of health and disease as well as development. 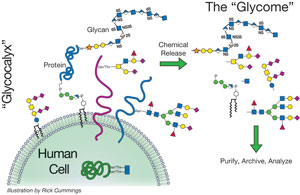 The roles of glycans, which are complex three-dimensional structures, are many and diverse. For example, glycans ensure that new proteins in our bodies are folded into the right shape so they can function properly. Some glycans direct white blood cells to sites of infection or send proteins to their correct destinations. Signals that enable the brain and immune system to function are also assisted by glycans.

Glycans are commonly found linked to proteins [glycoproteins] or fats [glycolipids]. These have critical roles that include, in the first case, the fertilization of eggs and the attachment of fertilized eggs to the uterine wall and, in the second, determining our blood type. Glycans inside cells affect the expression of genes and proteins, influencing how a cell responds to biological signals.

Many viruses and bacteria attach to glycans on the surfaces of cells, so glycans play an important role in infection, too.

The myriad roles of glycans, which are still being revealed, are as fundamental to development, growth, functioning, and survival as nucleic acids [such as DNA or RNA], yet we have so much to learn about them.

Q: Why is learning about glycans and the field of glycobiology so important?

A : Alterations in glycan structure — due to genetics, the environment, or aging, for example — almost always lead to disease. In fact, glycans are associated with vast numbers of diseases and disorders, including cancer, inflammation, infectious diseases, immunity, and congenital disorders, to cite just a few.

Because glycans play a role in almost every biological process and are involved in every major disease, having a clear understanding of their structure and function will certainly lead to the development of novel drugs to treat or prevent a wide range of conditions, and biomarkers to detect diseases.

In fact, our lab has been studying the role of glycans in cancer, and out of that work new biomarkers are being developed based on changes in the glycome of tumor cells. This is just one example of the enormous potential that exists for new drugs, diagnostics, and vaccines based on glycobiology. As a translational scientist who has founded two biotechnology companies, I am always focused on how glycobiology research can benefit patients.

Q: Considering its importance and potential, why has glycobiology only relatively recently become a research priority among investigators worldwide?

A . Until fairly recently, glycobiology, a term first introduced in the 1980s, has received little attention from the research community.

The sequencing of the human genome and the technology of mass spectrometry, which are essential to understanding the human glycome, opened up the field, which is now growing very rapidly. Within BIDMC and the Harvard community, there are many investigators from diverse specialties who are involved in and contributing to glycobiology research.

Another hurdle has been the lack of tools to probe the often complex structures and properties of glycans. The recent development and availability of new technologies for exploring the structures and functions of glycans, some of which were developed in our center, have also led to an increase in the number of investigators involved in this field.

Then, there is the incredible complexity of the human glycome, which unlike the human genome, is different for each cell type. But that is part of the challenge for all of us involved in this field — this is a new and exciting frontier!

Q: What is your vision for the Center for Glycosciences at HMS?

A : The mission of the Center for Glycosciences at HMS, which will be large in both size and scope, will be to improve human health through basic and clinical research in glycoscience.

Specifically, we plan to lead highly collaborative, interdisciplinary glycobiology research and translate this knowledge into the prevention, detection, and cure of a host of diseases. The center will provide investigators from throughout Harvard with the opportunity to network, form collaborations, share resources, and work together on solving problems, which is the way science must be conducted in the 21st century.

The center will provide education and training in glycobiology, including hands-on and virtual training in the technologies critical to glycoscience inquiry, as well as provide access to the technologies and resources critical for progress in this field. We will also engage junior investigators with an interest in glycobiology and assist them with their career development.

There is a great deal of excitement in the BIDMC and Harvard communities about this initiative, which we envision will be the epicenter of translational glycoscience research around the world.