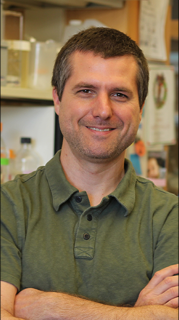 The goal of my laboratory is to understand the regulatory relationship between cellular signaling pathways and metabolic pathways. We are particularly interested in the PI3K (phosphoinositide-3-kinase) signaling pathway which is a major regulator of glucose and lipid metabolism and is perhaps the most frequently corrupted signaling pathway in cancer. Production of the lipid second messenger phosphatidylinositol-3,4,5-triphosphate (PIP3) by PI3K at the membrane recruits and activates effector proteins, such as the kinase Akt, to promote nutrient uptake, anabolic metabolism, and growth. Physiological activation of PI3K by secreted ligands such as hormones, cytokines, and growth factors ties cellular metabolism to the systemic metabolic status of the organism.

In cancer, PI3K signaling becomes growth factor-independent due to mutations in PI3K itself (PIK3CA is the second most-commonly point-mutated gene in cancer) or in major upstream cancer drivers (e.g. EGFR, MET, KRAS, PTEN). Although the ability of oncogenic PI3K mutants to drive tumorigenesis suggests PI3K directs a comprehensive and integrated metabolic program, the list of control points through which PI3K signaling is known to directly control metabolic activity is surprisingly short.

My lab has uncovered a novel regulatory relationship between PI3K signaling and Coenzyme A (CoA), an essential metabolic cofactor. CoA shuttles carbon within the cell (e.g. as acetyl-CoA) and is essential for several core metabolic processes including the TCA cycle, de novo lipid synthesis, and histone acetylation. Through ongoing research in the lab we are building on this discovery to further understand how signaling pathways control CoA metabolism.  Ultimately, the hope is to gain a deeper understanding of the role metabolic pathways play in supporting the PI3K-dependent program that is so intensely selected for in tumors. Dependencies within the signaling-metabolism nexus may be therapeutically exploited in a way that provides a greater therapeutic window compared to the targeting of signaling pathways directly.