The VanderHorst lab studies how circuit dysfunction in the central nervous system causes abnormal movement patterns seen in “Movement Disorders”, such as Parkinson’s disease, dystonias, or gait disorders. We use state of the art mouse models in parallel to research in human subjects and clinical pathological studies. By developing approaches that allow for translation between mouse models and human subject research and vice versa we aim to align these different research models and take advantage of their strengths.

A main focus of research in our lab is on the neural basis of gait disorders. Gait disorders lead to falls and decreased mobility and as such have a great impact on quality of life. These disorders can be due to problems that involve muscles, bones and peripheral nerves but can also be due to abnormal or loss of function in the central nervous system (brain, brainstem and spinal cord). Problems in the central nervous system lead to a variety of different gait problems. Examples include shuffling gait, freezing of gait (feet are glued to the floor) or festination (inability to control speed) as seen in Parkinson’s disease and clumsy or ataxic gait due to problems in the “little brain” or cerebellum. These abnormalities can occur side by side or alone and are often accompanied by problems that involve postural control and tone. Though it is clear that different networks are affected in these different types of gait problems, these networks remain poorly understood both in disease and healthy conditions. This gap in knowledge stands in the way of the development of interventions that specifically target the various gait problems.

Our major goals are to identify circuits in the central nervous system that control “normal” walking, posture and tone, to determine how dysfunction in these circuits results in different types of gait disorders, and how circuit modulation can correct these symptoms. We pursue these goals in a series of research lines that are outlined below, in which we integrate neuro-physiological, neuro-anatomical and clinical perspectives. In addition, our lab is involved in collaborative projects that focus on other Movement Disorders, such as dystonia and ataxia, and on non-motor symptoms that are common in Parkinson’s disease and atypical parkinsonian syndromes, i.e. problems with bladder control and sleep apnea. In all these projects, there is a heavy focus on brainstem circuits.

1. Neurobiology of walking and circuit mechanisms underlying gait disorders. In mouse models, we study how walking, posture, and tone are controlled by forebrain-brainstem-spinal circuits. We have identified distinct brainstem nodes that each contribute to the control or modulation of different gait metrics and that have unique connections to spinal networks in the spinal cord. To measure and quantify changes in walking gait in mice and translate these findings to human walking, we have developed and validated a statistical approach that facilitates comparisons between models. 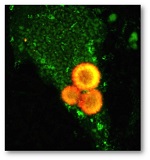 2. Gait and mobility problems in elderly subjects. In a clinical-pathological study we correlate measures of gait and mobility with pathology in brainstem and spinal sites of elderly subjects who donated their brains for research. The questions we aim to answer were developed using the above mouse models. This study is conducted in close collaboration with Dr Aron Buchman and Dr David Bennett from the Rush Alzheimers Disease Center in Chicago and is part of the Memory and Aging Project. As part of this project, elderly subjects undergo gait and mobility testing. Following brain donation, we then visualize and quantify different types of pathology and cell loss in relevant brainstem and spinal cord and correlate these findings with ante‐mortem measures of gait and mobility. We aim to determine the type of pathologies and the regions that contribute to gait impairment in older adults, the population most at risk for gait problems and falls. We then use this information to further sharpen and test hypotheses in our mouse models.

3. Circuit modulation to improve movement disorders. Our lab is leading a series of studies aimed to apply chemogenetic techniques to alleviate disease symptoms in movement disorders, such as Parkinson’s disease, dystonia and gait disorders. Our goal is to develop an approach that is effective, selective and safe use in patients with Parkinson’s disease or other CNS diseases. We use state-of-the-art viral vector approaches to target known circuit nodes in the central nervous system with modified receptors or channels, which we then can selectively control through a drug that only acts on these modified channels or receptors. We then measure whether selective modulation of the target nodes improves symptoms of Parkinson’s Disease or other CNS diseases and whether side effects occur. This is a collaborative project with Drs Saper, Simon, Arrigoni, and Fuller at BIDMC and of Dr Emborg at the Wisconsin Primate Center and Dr Murry at the Univ of Nebraska.

4. Gait signatures in human subjects with neurological disease. We have validated an approach to quantify changes in gait metrics or gait signatures at walking speed in mice. These signatures of walking gait in quadruped (4-legged) mice are similar to those in biped (2-legged) human subjects. We are now developing an approach to quantify and characterize gait disorders in human subjects, which are often due to a combination of factors (multifactorial) compared to mouse models in which one typically changes only one factor. The goal is to develop a method to detect abnormal gait metrics both in individual subjects as well as at the group level, which can aid to diagnose specific problems and to quantify the efficacy of therapeutic interventions.

5. Sleep apnea. In collaboration with Dr Elda Arrigoni and Dr. Clifford Saper, we study brainstem circuits in mice that control airway tone during sleep. These circuits are adjacent to and partially overlapping with brainstem circuits that we study in the setting of gait control. During sleep, the tone of muscles that keep the airway open decreases, resulting in sleep apnea. This project aims to identify the circuits that modulate the activity of muscles of the throat and tongue in a mouse model for sleep apnea using conditional tracing, in vitro CRACM (Channelrhodopsin Assisted Circuit Mapping) and in vivo electrophysiological studies.

6. Mouse models of cervical dystonia. Dystonias are characterized by twisting, repetitive, and often painful movements that interfere with normal movements or postures. They affect all age groups and occur in isolation or, more commonly, in the setting of stroke, cerebral palsy, demyelinating or neurodegenerative disorders such as Parkinson’s Disease. The neural circuits that mediate the abnormal muscle contractions in dystonias remain poorly understood. This presents a hurdle for the development of more precise treatment strategies.

While examining gait related circuits, we found a circuit node that produces typical characteristics of torticollis, a form of dystonia that affects the neck. We are taking advantage of this model to study how imbalance in neural circuits may mediate the twisting dystonic movements, the dystonic tremor, and the so-called sensory trick. This model is also allowing us to develop novel neuromodulatory strategies to alleviate dystonia.

7. Neural control of micturition. In collaboration with Dr. Zeidel and Dr. Verstegen, we are examining neural circuits that control filling and emptying of the bladder. We study the function and anatomy of these circuits in healthy mice and in disease models that affect bladder control. Our earlier studies in post mortem human tissues have shown that some of these circuits are well preserved among species and are affected in neurodegenerative disease such as Parkinson’s disease and Multiple System Atrophy. This may explain problems with bladder control that are frequently seen in these diseases and which cannot be managed with dopamine therapy.

Our lab uses a variety of techniques to study the function as well as the structure of neural circuits in mouse models. These include optogenetics, chemogenetics, or selective deletion tools, which we combine with detailed analysis of electromyography signals, electrical recordings of brain activity, or photometry during sleep-wake states. We have developed and validated mathematical techniques for analysis of gait at walking speeds, an approach that allows for translation of gait metrics between quadruped mice and biped human walking gait. We visualize and reconstruct the circuits that modulate or control these behaviors using novel and conventional anterograde and retrograde tracers, and use immunohistochemistry and in situ hybridization to determine the neurochemical and molecular properties of neurons in these circuits. In collaboration with Dr Elda Arrigoni, we enhance our in vivo experiments with Channelrhodopsin Assisted Circuit Mapping (CRACM) tools in projects where feasible.

Through these methodologies, in combination with our lines of clinical pathological and clinical studies, we hope to gain a detailed understanding of neurobiology of gait disorders, and other motor and non-motor features of movement disorders that will result in highly effective therapies for patients with movement disorders.

Funding for projects in our lab has been through the National Institutes of Health (NINDS, NIA, HLBI, NIDDK), the RJG Foundation, the Center for Mind Brain Restoration, and the Bachmann Strauss Dystonia and Parkinson’s Foundation. We are also sincerely grateful to the philanthropic donations that are allowing us to pursue new and bold paths, to families of patients who donated their brains for research, and to patients, their caregivers and research subjects for donating their time. 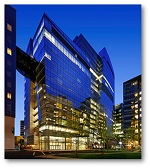 Our lab is located in the Center for Life Sciences, where many of our collaborators from the Departments of Neurology and Medicine at BIDMC are also located.

Schematic reconstruction of the motion of a mouse hindlimb during the swing phase of walking.

Examples of different types of head positions seen in cervical dystonia. Most patients present with a combination of these.

Phosphorylated alpha-synuclein immunoreactivity (brown) in the sacral spinal cord of a human subject with Parkinson’s disease.

Nerve fibers (green) from nerve cells in the reticulospinal formation of the brainstem project to interneurons (blue) in the spinal cord.