Genomic organization of the human and mouse SLAM locus

The genes encoding members of the signaling lymphocyte activation molecule (SLAM) family are located on human chromosome 1q23 and mouse chromosome 1 H2. Seven genes belonging to the SLAM-family are clustered in a genomic segment of ~400 kb, in both humans and mice. The arrangement of the SLAM-gene family is identical in both genomes. The only difference is their orientation; the genes in humans closer to the centromere are situated in mice closer to the telomere. Three other genes that belong to the SLAM-family (SLAMF8 and SLAMF9) are located in the same chromosome region, but outside of the SLAM locus. Human EAT-2 and mouse Eat-2a and Eat-2b are also located close to the SLAM locus. Filled boxes represent blocks of sequence containing a complete set of gene exons. Black arrows denote the transcriptional direction of these genes.

Structure of SAP Binding to Fyn 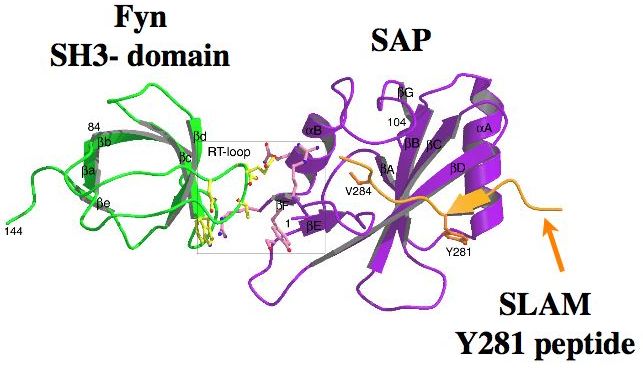 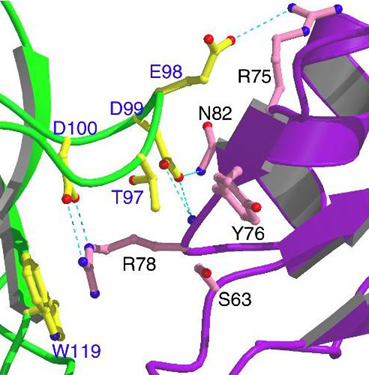 Top: Ribbon diagram showing the overall structure of the ternary SLAM-SAP-Fyn-SH3 complex. The SH2 domain of SAP (purple) binds the Fyn-SH3 domain (green) through a noncanonical surface interaction (boxed area) that does not overlap the SLAM-binding site (orange). 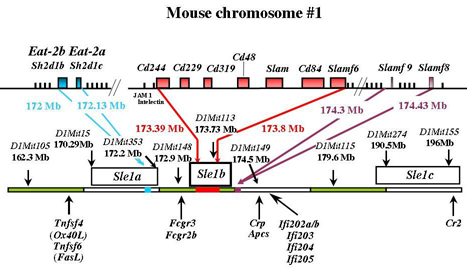 The upper portion shows the genomic map of mouse chromosome 1 and the position of the SLAM receptors and the EAT-2 loci. Filled boxes represent blocks of sequence containing a complete set of gene exons. The lower portion shows the three defined regions that compose the Sle1 locus (Sle1a, Sle1b, and Sle1c), as well as genomic markers and neighboring genes. Sle1a maps to an ~1-cM interval between the genomic markers D1Mit15 and D1Mit353, Sle1b is located in an interval of about the same size between D1Mit148 and D1Mit149, and Sle1c maps to the extreme telomeric end of chromosome 1, specifically to an ~2-cM interval between D1Mit274 and D1Mit155. The Eat-2 and SLAM receptor loci map to the Sle1a and Sle1b region, respectively. Genomic markers and their positions in chromosome 1 are noted in the map.

Reported mutations of human SH2D1A are shown together with the genomic organization or functional domains. The coding regions and 50UTR/30UTR of SH2D1A are shown in white or black bars, respectively. Amino acid positions of missense mutations are represented in black and nonsense mutations in red. An insertion of an adenosine residue at nucleotide position 544 in exon 3 results in a frameshift at amino acid 82 (fs82). This frameshift results in a different amino acid sequence comprising 20 residues, followed by a premature stop codon being introduced at amino acid 103. A point mutation in the termination codon adds (R129Stop) 12-amino-acid residues to the protein (RRKIKHLVLYFL). A natural variant of GTT deletion in the tail of SH2D1A is indicated with a rhombus. The CAAT box and splicing mutations are indicated by an arrow: a, ccaat to ctaat; b, t(+2)c; c, g(-1)t/a; d, a (-2)c; e, c(-3)g that results in exon 2 skipping; f, g(+1)a; g, g(-1) a and results in skipping of exon 3. + indicates a donor splicing site and a receptor splicing site.

Amino acid differences of mouse SLAM-family receptors between haplotype 1 and 2 are represented by green crosses (those found in the leader peptide sequence) or red crosses (those found in the rest of the protein). Areas containing multiple amino acid differences are displayed as red boxes. Arrows indicate ITSM motifs. Blue lines correspond to the C-terminal of short isoforms. The purple box represents the GPI-linked domain of CD48.