A History of Academic Excellence in Surgery 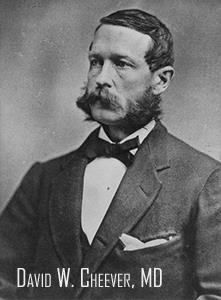 The roots of the Harvard Surgical Service at Beth Israel Deaconess Medical Center reach back to 1864, establishing it as one of the oldest academic programs in the nation with an explicit mission to provide advanced surgical care of the very highest quality to those in need, improve health through innovation and discovery, and prepare future leaders in American surgery.

In 1864, a brilliant young surgeon named David Williams Cheever, MD, joined the staff at the newly established Boston City Hospital, which was one of two Boston hospitals associated with Harvard Medical School.

Dr. Cheever, the son and grandson of physicians who trained under Dr. Oliver Wendell Holmes, Sr., created and grew a vibrant surgical program that rapidly established itself as a vital center for clinical care, training, and research of Harvard Medical School. A pioneering surgeon and man of immense dedication and integrity, Dr. Cheever served as the second Chair of Surgery at Harvard Medical School, succeeding Henry J. Bigelow at the Massachusetts General Hospital. He was editor of the Boston Medical and Surgical Journal, a predecessor of the New England Journal of Medicine, and in 1889 served as President of the American Surgical Association.

In 1973, following Harvard's decision to end its affiliation with Boston City Hospital, the Harvard Surgical Service, including all faculty and residents, as well as the Sears Surgical Research Laboratories, research endowments, and endowed Chairs, relocated to the New England Deaconess Hospital. The Beth Israel and New England Deaconess hospitals came together as Beth Israel Deaconess Medical Center in 1996.

The Beth Israel and New England Deaconess hospitals came together as Beth Israel Deaconess Medical Center in 1996, but for nearly a century each was a national leader in health care with a long history of excellence in patient care, innovative research, and outstanding medical education. The New England Deaconess Hospital was originally founded to care for the city's underserved residents in 1896, as part of the charter of the Methodist deaconess movement. In 1916, Beth Israel Hospital was established by Boston's Jewish community to meet the needs of the growing immigrant population.

Today, the medical center is a tertiary/quaternary hospital with a wide range of multidisciplinary, cutting-edge clinical programs. Nearly 30,000 operative procedures are conducted each year at Beth Israel Deaconess Medical Center, making it one of the busiest centers for surgical care in the United States.

Herbert L. Burrell, MD (standing far right) with members of the surgical faculty and trainees. Dr. Burrell was Professor of Surgery at Harvard Medical School and member of the Fifth Harvard Surgical Service from 1885 until his death in 1910.

The roots of the Harvard Surgical Service at Beth Israel Deaconess Medical Center reach back to 1864.