More Within Global Health in Medicine 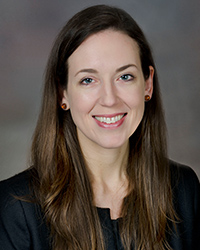 Dr. Sara Schwanke Khilji has had the opportunity to serve in a variety of international settings across Europe, Asia, and Africa, supporting community health, clinical and public health education, and research. She is currently based in Gaborone, Botswana on behalf of the Botswana Global Health Program, serving as Site Director for Internal Medicine. She is board certified in Internal Medicine and completed her residency training at Massachusetts General Hospital with a focus on primary care. Her interests include women's health, health policy, non-communicable diseases (NCDs), and quality improvement.

Dr. Jonathan Crocker is a hospitalist at BIDMC. He graduated from UMass Medical School and completed his residency and chief residency at Boston Medical Center in 2001. After working as a primary care clinician at Massachusetts General Hospital for nearly six years, Dr. Crocker moved to rural Malawi as Director of Clinical Services with Abwenzi Pa Za Umoyo (Partners In Health), Malawi. In this role, he supported and augmented clinical services focused on HIV, TB and malaria at the district level, oversaw the creation of Chronic Care and Kaposi Sarcoma clinics, and supported the growth of medical inpatient services at Neno district hospital, after it was built. Dr. Crocker joined the BIDMC medicine faculty in the summer of 2009. He completed a Rabkin Fellowship in Medical Education in 2011-2012. He is an Associate Program Director, and directs the Global Health Program (track and elective) within the IM residency program. He founded and directs the new Global Health Fellowship in Medicine at BIDMC. Prior global health experience includes research and clinical work in Nicaragua, Ecuador, Guatemala, and Honduras. Dr. Crocker's academic interests include health care delivery in resource-poor settings, mentorship of residents in global health activities, resident and hospitalist procedural training, and graduate medical education. He also directs the Katherine Swan Ginsburg Humanism in Medicine Program within the residency program.

Dr. Lachlan Forrow earned his MD from Harvard Medical School (HMS) and was an Albert Schweitzer Fellow at the Schweitzer Hospital in Lambaréné, Gabon. He completed residency at Rhode Island Hospital/Brown University, and General Internal Medicine and Ethics fellowships at Harvard.

For over 25 years, he has been active in the International Physicians for the Prevention of Nuclear War (IPPNW), which was honored in 1985 with the Nobel Peace Prize, and has served as IPPNW's Chair of Board of Directors and CEO, as well as New England Regional Director of IPPNW's U.S. affiliate, Physicians for Social Responsibility (PSR), and as a member of PSR during this time. He has served more recently as the organization's Parliamentarian and helps lead the organization's ICAN Campaign which seeks a Nuclear Weapons Convention, a treaty committing the world to the permanent, verifiable and enforceable elimination of nuclear weapons in a specified timetable.

In 2007, Dr. Forrow was awarded a Lifetime Achievement Award for Community Service from Harvard Medical School. He has lectured widely and published numerous articles and book chapters on issues in medical ethics education, palliative care, medical decision-making and the social responsibilities of physicians.

Based full-time in Hanoi, Vietnam, since 2009, Dr. Pollack provides training and clinical mentoring in HIV care and treatment to Vietnamese clinicians, and technical assistance to the Vietnam Ministry of Health, U.S. Centers for Disease Control and Prevention, and other partner agencies in the development of HIV curricula, guidelines, and policies. He has a particular interest in the use of technology to provide training in resource-limited settings and is currently leading a project to provide HIV training and clinical mentoring over the internet to distant sites in Vietnam. Dr. Pollack mentors visiting medical students and residents from BIDMC and other institutions.

Dr. Beth Riviello is a pulmonary critical care physician at BIDMC and at the University Teaching Hospital of Kigali in Rwanda. She received her medical degree from Vanderbilt School of Medicine in 2006, spent a year working at a hospital in Angola, then completed the Internal Medicine and Global Health Equity residency at Brigham and Women's Hospital in 2011 with a focus on health care delivery in resource constrained settings. She completed the Harvard combined pulmonary and critical care fellowship in 2014 before joining the faculty at BIDMC. In Rwanda, she has been involved in research and educational initiatives in critical care through the Human Resources for Health program. Dr. Riviello's areas of interest are the translation of current evidence for critically ill patients to resource constrained settings, medical education, the epidemiology of critical illness in Rwanda, and respiratory failure and sepsis in resource constrained settings.

Dr. Roger Shapiro is an Associate Professor in Medicine at Harvard Medical School and Harvard School of Public Health. His primary research interests are in Botswana, in the prevention of mother-to-child HIV transmission (PMTCT) and the reduction of morbidity and mortality among infants born to HIV-infected women through the Mashi Study in Botswana. He is the principal investigator of several studies evaluating virologic efficacy and HIV transmission rates among women receiving various antiretroviral combinations during pregnancy, delivery, and breastfeeding, and evaluating birth outcomes among HIV-infected and HIV-uninfected women in Botswana. He is a co-investigator for a pilot implementation study to provide male infant circumcision services in Botswana. Dr. Shapiro works closely with the Botswana PMTCT Programme, and is a member of the PMTCT Advisory Panel for the World Health Organization.

As Associate Director for Education at the Harvard Initiative for Global Health, he mentors Infectious Disease fellows, residents, and students in HIV research, and has helped to establish a Clinical Care and Research Fellowship at the Scottish Livingstone Hospital in Molepolole, Botswana to support fellows and junior faculty launch careers in HIV research.

Dr. Omar Siddiqi is based in Lusaka, Zambia where he has been a Lecturer at the University of Zambia School of Medicine since 2010. He completed medical school at the University of Rochester, and completed his neurology residency and epilepsy fellowship at BIDMC. Dr. Siddiqi has a specific interest in neuroinfectious diseases. His research as a 2010/2011 Fogarty International Clinical Research Fellow and an American Academy of Neurology Clinical Research Training Fellow has focused on molecular diagnosis of CNS opportunistic infections in HIV-infected Zambian adults and evaluating the etiology of new onset seizures in HIV-infected Zambians. His current research looks at novel diagnostic tests and host susceptibility factors in tuberculous meningitis.

Dr. Rebecca Zash is a member of the Division of Infectious Diseases at BIDMC and a Research Associate at the Harvard T.H. Chan School of Public Health. She graduated from the University of North Carolina School of Medicine and then completed residency and fellowship training at BIDMC. Prior to medical school, Dr. Zash helped to run an NGO to prevent mother-to-child transmission of HIV (PMTCT) in South Africa. She has pursued interest and research in HIV in pregnancy. During her fellowship, she lived in Botswana and ran several research studies evaluating the safety of antiretroviral therapy in pregnancy and infant outcomes. Her current research interests include understanding the mechanisms of adverse birth outcomes among HIV-infected women in Botswana and implementing drug-safety surveillance in pregnancy in resource-limited settings.