In October 2016, 53-year-old Luis Figueroa ran his first marathon. Successfully completing this long-distance race is a tremendous accomplishment for any runner, but for Figueroa, crossing the finish line was nothing short of a miracle: Just 10 months earlier, Figueroa had suffered a near-fatal episode of cardiac arrest at the end of a short race. Happy to be alive, he thought his marathon quest was over. But a novel procedure enabled Figueroa to achieve his ambitious goal, finishing the 26.2 mile race, free of chest pain — and free of worry. 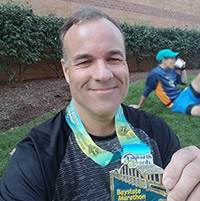 “I was middle-aged and out of shape,” says Figueroa. “My wife is a runner and she kept encouraging me to take up the sport.”

Starting off slowly, Figueroa, a director in GE’s Digital Business Unit, began running a mile on the treadmill. As the weather improved, he moved outside and doubled his distance to two miles. He then successfully completed a 5K road race near his home in Merrimack, NH. He distinctly remembers how proud he felt the first time he ran 10 miles non-stop at a 9:08 minute pace.

“It was an important milestone,” he says.

He was hooked. The father of three had lost 65 pounds and was routinely finishing races in the top 10 for his age group. After receiving a clean bill of health from his doctor, he decided that 2016 would be the year he would run a marathon.

But on New Year’s Day, after finishing the Millennium Mile, a popular “fun run” in Londonderry, NH, Figueroa collapsed. He was in full cardiac arrest .

Cardiac arrest is the abrupt loss of heart function, resulting when the heart’s electrical system malfunctions, and is often fatal. In Figueroa’s case, it was his first sign of a heart problem.

As terrifying as this episode was, says Figueroa, it proved to be an important warning sign. It was eventually revealed that he had a chronic total occlusion, an artery in the heart that is 100 percent blocked.

This unexpected discovery brought Figueroa to BIDMC, where he met Yeh, one of the country’s leading experts in complex, non-surgical interventions for patients with these extreme blockages.

Just four months later, on October 16, 2016, Figueroa fulfilled his New Year’s resolution, completing the Baystate Marathon in Lowell in 4 hours, 35 minutes — just five minutes over the goal he had set for himself before he collapsed.

The Importance of Family History

Heart disease is the most common chronic condition in the United States, affecting more than 27 million people. The risk factors are well-known: high blood pressure, high cholesterol, excess weight, inactivity. But, says Yeh, there are many people like Figueroa who lead healthy lifestyles, eat well, exercise regularly and have no outward symptoms — and still develop coronary disease.

Both of Figueroa’s parents had undergone bypass surgery to treat blocked coronary arteries. 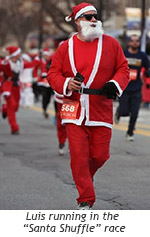 Figueroa considers himself lucky. The runner at his side when he collapsed during the New Year’s Day race happened to be a former EMT who immediately began administering CPR. Figueroa was soon resuscitated and taken by ambulance to Parkland Medical Center in Londonderry, NH, where a cardiac catheterization revealed several blockages of the heart’s arteries, one of which was treated with a stent to open the coronary artery.

Shortly thereafter, Figueroa was transferred to Catholic Medical Center in Manchester, NH, where he was implanted with a defibrillator, a device that keeps track of heart rate and can deliver an electric shock if the heart is beating chaotically and too fast.

“One of my main blockages was cleared,” says Figueroa. “There was a second artery that was blocked 100 percent, but the doctor recommended that I wait a few months before undergoing any further treatment. Of course, I wanted to know if I could still run. I remember my doctor told me, ‘You’re cleared to run races, just don’t try to win them.’”

Figueroa took him at his word and had his sneakers laced up in no time. But after warming up for the Millennium Running Club’s Cinco de Mayo Road Race in May, he felt something wasn’t quite right. Later on, the readout from his defibrillator would indicate that he had experienced an episode of ventricular tachycardia, a potentially lethal arrhythmia.

Back at the hospital, a stress test revealed that the bottom portion of his heart — where the fully blocked chronic total occlusion was located — was under duress. Figueroa was transferred from Catholic Medical Center to BIDMC, one of the few centers in New England specializing in the complex treatments needed to manage these complicated blockages.

Breaking Out of Coronary Gridlock

“In most cases, a blocked coronary artery is like a traffic jam on the highway,” explains Yeh. “Even when there’s heavy traffic, it’s likely that one of the highway’s five lanes is still open. This is the case of a typical coronary blockage of approximately 80 percent — it’s like one lane is moving and four lanes are closed. So, you can still see that there’s a pathway to perform angioplasty, or to get out of the traffic jam.”

But, says Yeh, in Figueroa’s case, the blockage was the equivalent of gridlock across all five lanes, leaving no channel at all for the artery to be opened through typical angioplasty.

“We first tried using a wire-based strategy to try and go straight through the blockage, but quickly realized that wasn’t going to work for Mr. Figueroa,” explains Yeh. “So we flipped rather quickly to doing a ‘retrograde’ procedure. With this technique, you enter through a blood vessel that isn’t blocked, but is supplying vessels to the back side of the blocked artery. By taking advantage of these collateral blood vessels, we were able to open the blockage from the back side — finding a totally different route around the gridlock to open the blockage against the ‘flow of traffic.’”

Complex CTO PCI techniques such as ‘retrograde’ procedures are performed at only a small number of centers across the country.

The procedure was successful. By the next day, Figueroa was feeling much better. Within a week, he was carefully exercising and had once again focused his attention on the upcoming marathon.

A Return to the Race Course

“This was a very important part of Mr. Figueroa’s life and we wanted to give him the best opportunity to achieve this goal,” adds Yeh. “This was not something he would have been able to do with his heart under duress.”

“You have to begin training about 14 to 16 weeks prior to a marathon, which meant that in order to compete in the Bay State race in the fall, I was going to have to get started in July,” says Figueroa. “I had the CTO-PCI procedure on June 13th, went home the next day, and immediately felt a noticeable difference. I was able to train throughout the summer, logging as many as 49 hours a week and completing the long 18-mile two- to three-hour runs without having any chest pain.”

On October 17, Dr. Yeh received an email message. The subject line read “A Big THANK YOU – I Did It!”

“Dr. Yeh, A big thank to you and Dr. Pinto for getting me cleared up and fixed to run … My goal time was 4:30 and I ended up just five minutes over so I am pleased. I ran strong first half under 10 min pace for the first 16 miles and ended with average pace for 10:30 which is not bad for a first-timer. I could not have done this had it not been for the skillful work you did. To be able to complete a marathon after collapsing and being in cardiac arrest, I have you to thank.”

Today, Figueroa continues to receive anti-platelet medication to prevent clots from developing in his stented artery, and continues to eat well and maintain his healthy lifestyle. And after recovering from his October marathon, he continues to run shorter road races.

“I’ll probably always be a runner,” he says, adding, “One of the most important lessons I learned when it comes to heart health is to make sure you’re aware of your family history.”