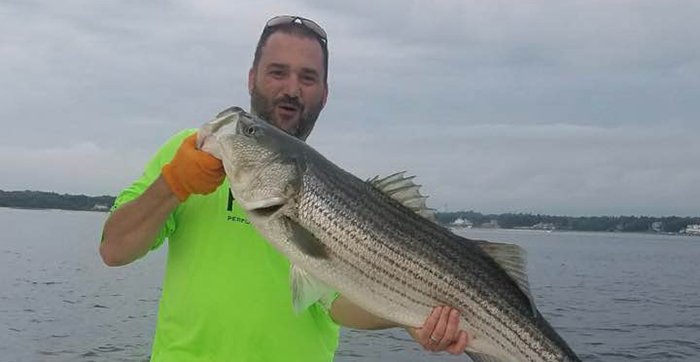 Evan Walsh, age 41, is an avid golfer and fisherman who appreciates the exactness of both avocations, and he also sees parallels between those activities and medicine. The obvious difference, he says, is that while golf and fishing enhance his life, his most recent medical procedures at Beth Israel Deaconess Medical Center’s Cancer Center saved his life.

Walsh, who lives in Medfield, Mass., and manages a family team at William Raveis Real Estate in Wellesley, was in good health prior to warning signs of bladder cancer beginning in 2014.

His challenges started when he detected “small red flakes” in his urine. He saw his primary care physician, was diagnosed with an inflammation of the prostate, and felt better after taking antibiotics.

Six months later, shortly before his wedding, the symptoms recurred. He had a CT scan and ultrasound. Then came a cystoscopy: through a scope, a camera was inserted in this urethra to view the inner linings of his bladder. No tumors were detected, and Walsh hoped he was “out of the woods.”

After Walsh’s wedding and the birth of their daughter in 2015, blood returned to his urine, and he was referred to a community-based urologist associated with BIDMC. An MRI revealed two malignant tumors and the need for a TURBT (Transurethral Resection of Bladder Tumor) to scrape the tumors on the inside of the bladder wall. Following the procedure, a microscopic examination of the tumors revealed that the tumor had grown through the muscle wall of Walsh’s bladder, which meant his diagnosis was Stage 3 urothelial carcinoma (bladder cancer).

Walsh was referred to Peter Chang, MD, MPH, a urologic oncologist specializing in minimally invasive bladder surgery at BIDMC’s Cancer Center. During a consultation with Walsh’s family in February 2016, Chang explained that Walsh needed a radical cystectomy: surgery to remove his bladder and to see if the cancer had spread to his lymph nodes. Walsh was shocked and scared.

Chang reviewed two options for managing the path of urine from the bladder:

“I was obviously very anxious, but I did my research and learned that Dr. Chang is one of the very few cancer surgeons in New England who can perform the neobladder surgery,” says Walsh. “I wanted to preserve my life as best I could and elected to go with that route.”

BIDMC was the first institution in New England to perform the above surgeries without an open incision, using minimally invasive robotic surgery. BIDMC remains the only institution in the area to offer totally robotic neobladder surgery.

To optimize the success of the operation, Walsh started a six-week regimen of aggressive chemotherapy under the direction of BIDMC oncologist Kathleen Mahoney, MD, and Patti O’Connell, RN. He tolerated the chemo well and was pleased when an MRI determined that the tumors had shrunk and hadn’t spread to other organs.

The surgery was performed in April 2016 by Chang and his surgical partner, Andrew Wagner, MD, who removed the bladder and the prostate but saved the sphincter muscle that controls the flow of urine and helps prevent incontinence. They also removed 48 lymph nodes, and biopsies fortunately revealed no malignancy there.

“Evan’s story is unique, starting with the intricacy of this cutting-edge procedure, which includes the removal of two major organs, extended pelvic lymph node dissection and urinary reconstruction—namely, the creation of a neobladder, all inside the body without making an open incision more than one inch in size. What was also highly unusual was Evan’s young age, as the average bladder cancer patient is between 60 and 80 years old,” says Chang.

Following a successful operation, Walsh was admitted to BIDMC for a week and was discharged while hooked up to drainage tubes and with a temporary bag used to emit urine. He went home, where he gradually recovered with the help of his wife and visiting nurses.

Subsequent check-ups at BIDMC facilitated his recovery through the removal of Walsh’s tubes as well as the bag. After three weeks, Walsh was thrilled to be able to urinate through his penis.

After missing three months of work, Walsh was considered cancer-free with no restrictions on his lifestyle.

“Hey, we had our best year at work, and I caught my biggest fish following my surgery! Dr. Chang saved my life,” he adds. “Now, I believe it’s important to motivate other patients and donors.”

Walsh appreciates his newfound health: “I’ve still got my family, my work, my golf, my fishing. I’ve got my life.”