Without CPR, I May Not Have Survived 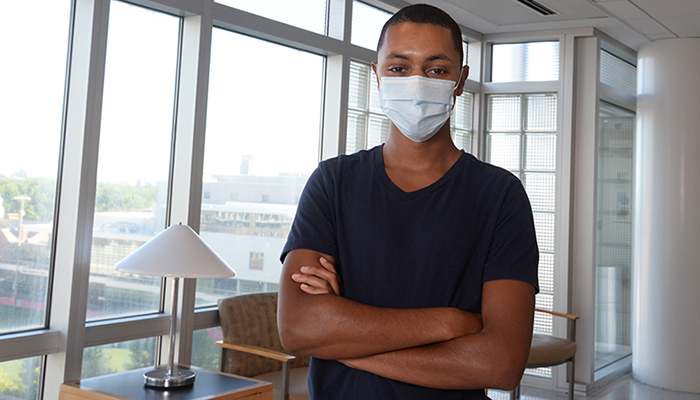 It was a Saturday morning in February 2019, and Ryland Roderick had set out for a short run near his Brookline home. He remembers the sweater he was wearing. He remembers that he was listening to a new song by Ariana Grande. He remembers that it was freezing cold as he stepped from his driveway to the street. But after that, his memory is blank.

"The next thing I can remember is waking up in the hospital, hooked up to tubes and machines," says Roderick, who was 19 at the time." I knew something bad had happened, but that was all I knew."

Roderick had suffered sudden cardiac arrest and was in the Cardiac Intensive Care Unit at Beth Israel Deaconess Medical Center.

The seemingly healthy teenager would later learn that as he neared the end of his run, his heart had gone into ventricular fibrillation, a life-threatening heart rhythm disturbance (arrhythmia) that can cause collapse and the abrupt loss of heart function. With the quick thinking of several bystanders who took turns performing cardiopulmonary resuscitation (CPR), Roderick's heartbeat was restored until an ambulance arrived to take him to the hospital.

Once at BIDMC, Roderick, a third year student at the Massachusetts College of Pharmacy and Health Sciences, underwent an extensive series of tests and was soon diagnosed with hypertrophic cardiomyopathy. This genetic condition causes the heart muscle to grow abnormally thick, making it difficult for the heart to pump blood. In Roderick's case, the condition also led to the development of the life-threatening arrhythmia and sudden cardiac arrest.

Like many young patients with hypertrophic cardiomyopathy, Roderick had always been healthy and active and had had no other warning signs of a heart problem.

"I learned that this condition can be triggered during exercise," he says." Scar tissue that developed as a result of the heart's thickened muscle had redirected my heart's electrical system, leading to the dangerous arrhythmias that I experienced while I was running."

The following Wednesday, Roderick underwent surgery to have an implantable cardioverter defibrillator (ICD) placed in his chest. The device is programmed to deliver electric shocks to restore normal heart rhythm if his heart begins beating erratically.

"Having the ICD makes me feel like I always have emergency medical staff available to save me," he says." I've now been living with the ICD for almost two years and have adjusted to my new routines. I recognize that I'll now always be a cardiac patient so I take precautions like avoiding heavy lifting and monitoring my heart rate whenever I'm exercising," he says." But I haven't stopped living my life."

Roderick went back to classes the day after his surgery and has resumed his part-time work conducting research in the school's neurodevelopmental brain and behavior lab. Through a Facebook group, he also actively provides support to fellow patients with hypertrophic cardiomyopathy.

He has also struck up a friendship with the bystander who revived him on that cold February morning." The person who performed CPR on me happens to be a doctor and, through a series of coincidental connections, I was able to track him down so that I could thank him," says Roderick." We now keep in touch, which means a lot to me. Without his help and knowledge of CPR, I may not have survived."

Roderick himself has received CPR certification." It's pivotal that everyone know how to save a life when it's so easy to learn the procedure," he adds.

Ernest Gervino, ScD, director of the Clinical Physiology Laboratory in BIDMC's CardioVascular Institute, agrees." CPR gives victims of cardiac arrest a fighting chance until advanced life support can be on the scene," says Gervino, a member of the Executive Committee for the American Heart Association's Boston Heart Walk." CPR can be put to use for people whose hearts have stopped beating because of accidents, strokes or other medical conditions and can double or even triple a person's chance of survival. If more people knew how to perform CPR and were confident in performing it, fewer lives would be lost. CPR is a critical link in an emergency situation."

During the COVID-19 outbreak, the American Red Cross currently recommends compression-only CPR with no rescue breaths for adult cardiac arrest patients with confirmed or suspected COVID-19, due to the risk of disease transmission. While there is currently no specific data on COVID-19 transmission while performing CPR, it is reasonable to conclude that chest compressions have the potential to generate respiratory droplets or aerosols and close contact needed for some aspects of first aid may have risk of transmission.For lay responders and those who may need to provide care to someone suspected to have COVID-19. We recommend wearing PPE as recommended by CDC.

A New Awareness of the Heart

Roderick was already on a career track to become a physician assistant at the time of his cardiac arrest, and is now exploring the possibility of specializing in cardiac medicine when he finishes his studies.

"Ryland experienced a cardiac emergency firsthand," says electrophysiologist Patricia Tung, MD, who together with BIDMC cardiologist Loryn Feinberg, MD, now oversees Roderick's cardiac care." Since then, not only has he remained extraordinarily positive and engaged about his health, but he has become interested in learning more about the heart and treatment of cardiac patients." Before the pandemic, as part of his curriculum, Roderick was "job shadowing" Tung once a week in the electrophysiology division of BIDMC's CardioVascular Institute.

"Since I started shadowing Dr. Tung I've had a deep, extensive view of how the heart works and what an amazing organ it is. I've grown to love cardiology and I think of all the doors that have now been opened to me," says Roderick. Under the care of Tung and Feinberg, MD, Roderick finds himself inspired." I grew up with all women and I love that two brilliant strong women helped save my life."

Above content provided by the CardioVascular Institute at Beth Israel Deaconess Medical Center. For advice about your medical care, consult your doctor.
View All Articles 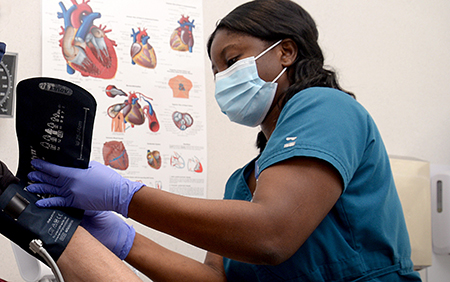