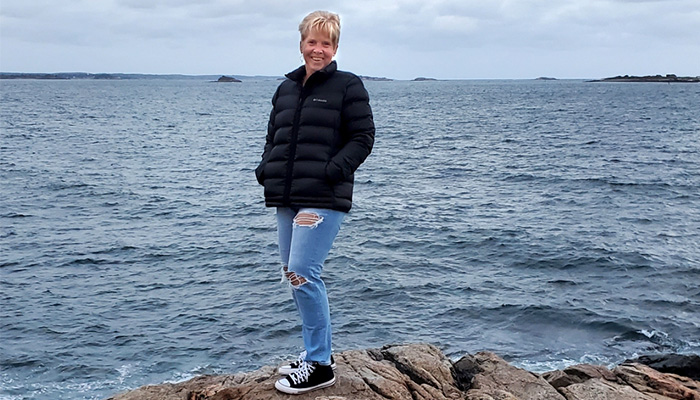 Maureen Leblanc has struggled with lymphedema for more than 12 years. Before her diagnosis in 2009, the active mother of four and grandmother of 12 had never heard of the condition, which causes swelling in the legs or arms. The condition often develops after a patient’s lymph nodes are removed as part of cancer treatment in order to determine if cancer has spread.

“Following surgery and radiation therapy for endometrial cancer, I noticed that my leg would swell during my daily walk,” says the Templeton, MA resident. Things grew much worse the following year when it was discovered her cancer had spread and additional surgery and treatment were required. “At that point, my right leg was twice the size of my left,” says Maureen. “It was so swollen I had to buy two pairs of pants and have them altered to make a single pair to fit my left leg.”

Years of wearing a compression garment have helped Maureen manage the lymphedema, but the tight-fitting garment is uncomfortable and limits activity. Several years ago, she happened to see a TV interview with Dhruv Singhal, MD, Director of Lymphatic Surgery at BIDMC. Dr. Singhal was describing lymph node transplantation, a surgical treatment option for lymphedema whereby healthy lymph nodes are transplanted from a patient’s abdomen to replace lymph nodes that were removed during cancer treatment. It was determined that Maureen was a good candidate for the procedure.

Although a series of health setbacks and the delays caused by the Covid pandemic meant that Maureen’s surgery had to be postponed a number of times, as things turned out, the timing was ideal. This past spring, Maureen became the first patient at BIDMC — and one of the first in New England — to undergo the lymph node transplant surgery through a minimally invasive laparoscopic procedure, avoiding open surgery and a large incision.

A New Option for a Tough Problem

The minimally invasive surgery was the culmination of careful planning and collaboration among the surgeons and medical staff of the Boston Lymphatic Center, a joint collaboration between Beth Israel Deaconess Medical Center and Boston Children’s Hospital. The Center is led by a multidisciplinary team and distinguished by its innovative surgical treatments and compassionate patient care.

“Over the past five years, our dedicated team has conducted dozens of successful lymph node transplants to help patients battling lymphedema,” says Dr. Singhal. “Under the direction of Jonathan Critchlow, MD, we worked closely together to safely develop the minimally invasive lymph node transplant surgery.”

This procedure involves finding and removing a graft consisting of functioning lymph nodes by a blood vessel next to the stomach from the abdominal cavity. This is then transplanted into the affected limb by Dr. Singhal, who then connects it to blood vessels in the area using advanced microsurgical techniques.

“Initially, the graft retrieval was done through a four-to-six-inch open incision in the patient’s upper abdomen, which can be painful for the patient,” says Dr. Critchlow. “After a number of these procedures we were comfortable with moving to a less invasive approach, building on our experience with laparoscopic gastric surgery for stomach cancer.” Instead of a large open incision, the surgical team places a laparoscope — a small video camera attached to a long lens — through a tube into a smaller two-inch incision above the belly button. Several smaller tubes are then placed in the lower abdomen for instruments used to aid in exposure and dissection. Surgeons are then able to identify the target blood vessel and nodes, free them from their attachments with clips, and remove the graft for placement.

“The small incisions are then closed and Dr. Singhal performs the real magic by sewing the graft,” says Dr. Critchlow.

For Maureen, the collaborative care she received was invaluable as she had developed blood clots in her lungs and legs, which required careful planning around the timing of the procedures. Her scheduled surgery was put on hold as Maureen began taking blood-thinning medication for the clots, under the guidance of Lymphatic Center team member Brett Carroll, MD, Director of Vascular Medicine in BIDMC’s CardioVascular Institute.

“There have been a lot of ups and downs for me over the past five years,” says Maureen. “If it weren’t for the care and encouragement of Drs. Singhal and Carroll, I don’t think I would have been able to go through with this. They worked through everything with me at a time when I felt lost.”

Today, Maureen’s treatment continues with a course of routine physical therapy to help improve the flow of lymphatic fluid in the affected area and, ultimately, reduce swelling and increase mobility.

Having recently celebrated her 60th birthday, Maureen has no plans to slow down. “I was very fortunate and I think it was in the cards for me when I happened to see Dr. Singhal on TV,” she says. “Having the surgery opens up the possibility that I’ll be able to better manage this condition and do all the things I want to do. I’d like to go skydiving one day if I can find someone who will go with me!”