Although usually not life-threatening, lymphedema is an uncomfortable and painful swelling that can commonly occur in a person’s extremities (arms or legs) after treatment for certain cancers.

To see if a particular cancer has spread, a surgical oncologist may sample or remove lymph nodes from a part of the body.

Sometimes, the removal can cause lymph fluid to accumulate in that extremity, which is lymphedema. Radiation treatment further increases the risk of lymphedema.

Dhruv Singhal, MD (right), Director of Lymphatic Surgery at BIDMC, compares the lymphatic system to a network of trains.

“The steps we need to take to treat cancer, like lymph node removal, often derail the lymphatic train ­— it is an unavoidable consequence of making sure we get the best possible cancer outcome, which is always the priority,” Singhal says.

In most cases, lymphedema develops slowly over time. The swelling can range from mild to severe. It can start soon after surgery and/or radiation treatment, or months or even many years later. Lymphedema can greatly impact a patient’s quality of life due to the pain and the physical appearance of the swelling.

“It’s not uncommon for patients with lymphedema to experience some type of depression,” says Singhal. “Not only can it be very painful, but it can cause such extreme swelling that people have a hard time fitting into their normal clothes and often become very self-conscious or even embarrassed by the appearance of the arm or leg.”

Until recently, patients with lymphedema were treated by physical therapists mainly with manual lymphatic drainage (a type of skin massage), compression and exercise.

“New technology allows us to measure baseline fluid levels, so we can identify even small increases in edema quickly, before the edema becomes visible,” says Kathy Shillue, a physical therapist and Clinical Services Manager of Outpatient Rehabilitation Services at BIDMC. “The earlier we can begin treatment, the better chance we have of preventing progression of the disease, and the better the outcome.”

Additionally, new surgical treatments are not only improving lymphedema in patients who have had the condition for many years, but an innovative procedure may even prevent it from occurring.

Depending on the type and stage of cancer, as few as one to two lymph nodes or as many as 20 or more may need to be removed. 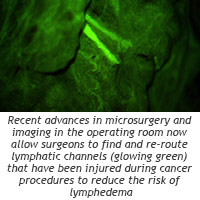 When a higher number of lymph nodes are removed, there is a greater chance for lymphedema to occur.

An innovative procedure called lymphovenous bypass has been developed to “keep the [lymphatic] train on track.” During the removal of lymph nodes by a surgical oncologist, a fluorescent green dye is injected into the closest extremity, which makes the lymphatic channels, or train, glow. That glow can then be followed to figure out where the lymphatic channel was injured, or derailed.

Utilizing a specialized microscope in the operating room, the plastic surgeon is then able to re-route the train at this spot onto a different track system, or the veins. This restores the flow of the lymphatic fluid so that the risk of swelling in the extremity is minimized.

As this procedure is relatively innovative, there is not a lot of data; however, “… The results that we do have, both long- and short-term, are showing exponential drops in lymphedema rates into the single digit range,” Singhal says. “That is a dramatic change.”

Unlike lymphovenous bypass, which takes place at the time of lymph node removal, lymph node transfer surgery can be performed well after a patient has developed lymphedema, if the traditional treatment of physical therapy isn’t working.

“Patients who have been living with lymphedema for many years have shown such incredible progress after having lymph node transplants,” says Singhal. “I’ve performed this procedure on patients who had lymphedema for four, five or even six years. And within six months of treatment, we have seen great improvements.”

During the procedure, surgeons relocate healthy lymph nodes to a region where lymph nodes were removed due to previous cancer surgery.

Through an incision in the abdomen and with the aid of a microscope, the surgeon carefully selects healthy vessels and lymph nodes. The targeted nodes are removed, along with the veins and arteries and some surrounding tissue. The targeted lymph nodes are transferred to the affected area, where blood vessels are reconnected.

“I liken this to giving the patient a brand new train,” Dr. Singhal comments.

But treatment doesn’t end there. An important part of the program is surveillance. After surgery, physical therapy is continued to help improve the flow of the lymphatic fluid in the affected area as the body heals with the goals of improving symptoms, such as reducing swelling and increasing mobility. After an initial reduction in swelling, patients often have to continue doing some form of long-term self-treatment to keep the lymphedema under control.

BIDMC is one of a few select hospitals in the country to offer the preventative lymphovenous bypass, which was actually developed in Italy, and the lymph node transplantation. It’s a multidisciplinary program, which means that plastic surgeons work in collaboration with colleagues, such as physical therapists, surgical oncologists, radiologists and other clinical staff both in and out of the operating room.

“We are taking a team approach to lymphedema, which can be one of the biggest cancer survivorship issues,” says Ted James, MD, Co-Director of the BreastCare Center at BIDMC. “I’m excited that we can offer these services to our patients. Lymphedema is often underestimated and can be a serious complication for some patients undergoing cancer treatment. By eliminating this side effect of treatment, we can make patients more comfortable, improve their physical function and increase the care experience for patients at the BreastCare Center.”