A Personal Trainer for Your Brain

With a family history of Alzheimer’s disease, Margaret Pantridge lives in fear that one day she may also be facing cognitive decline.

“I suspect that it still is not really possible to prevent Alzheimer’s disease, but I do buy into the idea that you can stave it off, and I feel that, especially with a family history like mine, I should do everything I can,” she says. 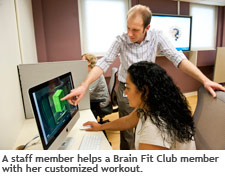 A desire to be proactive about brain health is what brought Margaret to the Brain Fit Club at Beth Israel Deaconess Medical Center. With the neighborhood gym as the model, the Brain Fit Club offers members personalized workout routines designed to keep each member’s brain limber and active.

“The goal is to make sure that each one of us is able to have as meaningful a life, across our entire lifespan, as we can. That means functioning as well as we can in health, making it less likely that we’ll develop illness, and coping as well as possible with any illness that may come,” says Alvaro Pascual-Leone, MD, PhD, Chief of Cognitive Neurology at BIDMC. “We believe that in order to achieve that, our brain has to be as healthy as possible.”

“And in order to really derive the greatest benefit, we need to individualize these interventions,” says Dr. Pascual-Leone. “In essence, it’s like a personal trainer for your brain who assesses you, follows you and challenges you.”

Brain Fit Club members start with an evaluation by a neuropsychologist, who assesses each person’s cognitive abilities using objective measures.

“Based on that cognitive profile, we then identify targeted interventions to address each individual’s area of weakness. The ‘workout’ regimen will be different for a person dealing with an attention issue, say, than for a person having trouble with memory, or dealing with the effects of a concussion,” says Bonnie Wong, PhD, a neuropsychologist and the Director of the Brain Fit Club. “Not only do we develop a program that’s tailored to that particular person’s needs, but we can also track their progress and adjust their program as time goes on.”

88-year-old Ruth Whitman is a highly motivated member of the Brain Fit Club. She’s recovering from a stroke and has seen improvements since joining a tai chi class.

“I want my brain to get stronger,” she says. “The tai chi helps strengthen my mind and my body so that I don’t trip and fall.”

“The studies are starting to be done and they do show that a multi-prong approach to lifestyle modification, where you exercise, sleep better, watch what you eat, participate in cognitive training and such, does help individuals maintain their cognitive function,” says Dr. Pascual-Leone.

In fact, a large study out of Finland published in the Lancet in March 2015 showed that individuals at risk for Alzheimer’s disease who participated in lifestyle changes, like those available at the Brain Fit Club, scored 40 percent higher on cognitive testing than those who did not participate.

The success of the study and concept underlying the Brain Fit Club both rely on the science of neuroplasticity, or the brain’s ability to change or adapt in the presence of new experiences or obstacles. Until recently, it was thought that after the first few years of life, our brains stopped creating news cells and that once our neural connections were laid down in childhood, those brain networks were fixed for life. But research in the past two decades has shown that the brain actually never stops producing new cells, that new connections are constantly made and that there is lifelong potential for development and adaptation.

Members of the Brain Fit Club are already seeing the benefits of brain training.

“I’ve had several folks tell me that it was like night and day for them and that they noticed lots of little things day to day, making less attentional errors during the day, being more mindful, missing less appointments, things like that,” says Dr. Lindsay Miarmi, a Brain Fit Club neuropsychologist.

Susan Megerman is hoping she’ll have similar success. She started coming to the Brain Fit Club because she was worried about her memory.

“But then I just got interested in figuring out how to maintain good brain health,” she says. “I want to remain independent. I want to be available for my grandchildren and children and for me; that whole idea of working to age well feels really important and an exciting opportunity.”

To learn more or make an appointment, go to bidmc.org/brainfitclub.