Honored for their commitment to excellent care 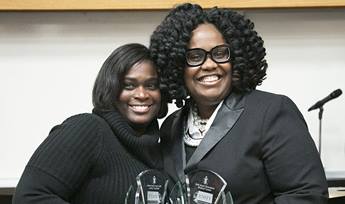 BIDMC’s annual award ceremony is part of the national YMCA Black Achievers Program, started in the 1960s to mentor African-American teens academically and professionally. As a participating employer in the program, BIDMC celebrates Dr. Martin Luther King, Jr. each year by presenting Black Achiever Awards to employees who commit their time and talents to the development of young people and their communities.

“This is the 27th year we’ve gathered to honor Dr. King and the Black Achievers,” said Kevin Tabb, MD, President and CEO of BIDMC. “Every day, Menrika and Jennifer bring to life our mission. They represent the very best of who we are.”

“This is a very special place, so never forget the culture you have here,” said keynote speaker Carol Fulp, President and CEO of The Partnership and a member of BIDMC’s Board of Directors. “This award will inspire Menrika and Jennifer to greater heights, so I encourage them accept it not for all that they have already done, but for what they are about to do, because of this very special honor.” 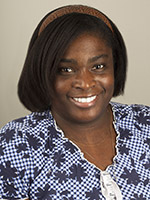 Jennifer Thomas, RN
Jennifer Thomas, RN, Unit Based Educator, Medical Surgical Float Pool, came to BIDMC as a high school student. At the age of 16, to keep her busy for the summer, Thomas’s mother enrolled her in the Choose Nursing program, where she learned to provide basic nursing care.

“I learned that all you had to do sometimes was pour a pitcher of water for a patient and they would be thankful, and that interaction could totally change their day,” she said. “So I took that knowledge of doing the simplest thing, and I ran with it.”

Thomas worked as a patient care technician while earning her nursing degree from the University of Massachusetts, Dartmouth. After graduating from nursing school and passing her boards, she was offered a position caring for patients on a busy floor in BIDMC’s West Clinical Center, now called the Rosenberg Building.

“Jenny never says no, it’s always ‘how can I help,’ and there is no expectation of thanks. It’s just what she feels she needs to do,” said Barbara Carney, RN, Nurse Manager. “She wants to give back, especially to those who might not have had the same opportunities she has had.”

After seven years of direct patient care, Thomas now works as a nurse educator, mentoring new nursing graduates. In her new position she has also taught BIDMC’s practices and procedures to visiting nurses from Haiti with the goal of providing better care to patients there.

“There is a saying that people may not always remember what you say, but how you say it. And when people think of Jenny, they’re going to remember that they felt respected, that she is someone who at any point would help them to learn, develop and grow,” Carney said.

“It feels strange to accept an award for something that I want to do and enjoy doing,” said Thomas. “Twenty years ago, someone gave me the opportunity to be the best I can be, and I take that with me, and I will continue to help others be the best they can be too.” 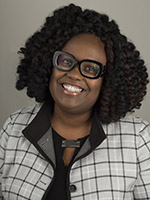 “I remember my dad sat us down and told us he expected us to do our very best, no matter what. He said, ‘you are going to shine, and you’re going to pay it forward and treat every single person as the human being they are,’ ” Louis recalled.

With that in mind, Louis entered school and worked hard to do her best. She wanted to make her parents proud. In 1992, she joined the then Beth Israel Hospital, and with that same determination, worked as a nursing assistant in the cardiac care unit. She later transferred to Labor and Delivery, where she was as a surgical technician and practice assistant. During that time she also earned a bachelor’s degree in Sociology of Health from Simmons College and went on to earn two master’s degrees in Public Administration and Health Administration from Suffolk University. In 2012 she accepted her current leadership role in BIDMC’s Pain Center.

“Menrika is the heart and soul of our operation,” said Christopher Gilligan, MD, MBA, Chief of Pain Medicine. “She does something miraculous in leadership, which is that she simultaneously maintains the highest standards – I’ve never seen her drop the ball on anything – and the whole time she has never lost her laser focus on the individual patient and making sure that person gets the highest quality care and the most compassionate care.”

“Jennifer and I have been given the baton to carry on Martin Luther King’s legacy,” said Louis. “It’s easy to do within these walls, but the challenge is to do it more broadly within our sphere of influence to really see everyone and treat them as part of the human race. And if you and I were to do that, then we would become the light that my mom always reminds my sister and me to be.”