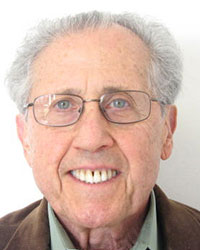 Until recently, Charlie F., age 79, of Brookline, Mass., had a long history of urinary problems — two decades' worth, to be exact.

Among them was urinary retention, which prevents an individual from emptying their bladder completely or at all. Often caused by benign prostate hyperplasia (BPH) — also called prostate gland enlargement — the condition can sometimes result in a complete urine blockage, requiring the placement of a long-term catheter.

Those with BPH have a benign growth of their prostate that can also weaken or delay urination and cause frequent urination at night, among other symptoms. It's the most common health problem among men — 50 percent will experience signs of it in their 50s, and up to 90 percent will experience signs of it by age 85. The symptoms can vary from bothersome to life-threatening.

There are very few miracles in life, and this was one of them.
Charlie, BIDMC Interventional Radiology Patient

After struggling with an episode of urinary retention, Charlie went to the hospital and had a catheter placed. Later on, a urologist friend suggested that Charlie learn how to use a catheter himself, a process called clean intermittent catheterization or CIC, so that he wouldn't need to rush to the hospital each time.

"I did that for several years and became used to it after a while, but I felt I always needed to be particularly aware of where the closest restroom was, especially if I was traveling," Charlie said.

While the current standard of care for BPH surgery is transurethral resection of the prostate (TURP), possible side effects include bleeding, pain, bladder control issues, and sexual dysfunction. It also requires hospitalization and the use of a catheter post-surgery.

Depending on the patient's unique situation, PAE can be an alternative to TURP or other urological procedures, can be performed without general anesthesia, and is a safe, effective, and relatively painless treatment.

Through a pin-size hole in the wrist or groin, an interventional radiologist specially trained in the procedure, such as Sahil Mehta, MD, inserts a small, temporary catheter into the artery supplying the prostate and injects tiny round particles into the vessels to reduce blood flow.

"I remember thinking to myself, 'this sounds like it might be worth doing,'" said Charlie, who learned the outpatient treatment can ease urinary symptoms, spare erectile function, and dramatically increase one's quality of life.

He decided PAE was right for him and successfully underwent the procedure in September 2020. "My appointment began at 9 am, and I was walking out of the building to my wife at noon," Charlie recalled. His urine flow and strength also significantly improved immediately after and, for the first time in years, he didn't need to use a catheter at all.

For prospective patients, it's important to know the most successful treatments are by physicians who have treated numerous patients, and the BIDMC IR team performs among the most PAEs of any medical institution in the country.

"Prostate artery embolization is an incredibly intricate and technically challenging procedure, but when done by those who have extensive experience, is remarkably safe and effective," Mehta says. "Even after personally treating hundreds of men with PAE, I'm still amazed by the results we can achieve."

For Charlie, the results were especially remarkable.

"There are very few miracles in life, and this was one of them."

Read More About Prostate Artery Embolization: 'It Was a Game-Changer'