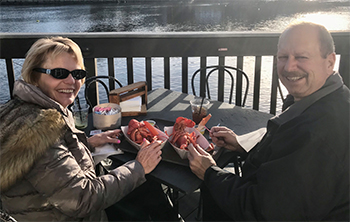 Ed Lucia, 74, had lived with an enlarged prostate gland for years, but when increased urination, poor urinary flow, and the urgent need to urinate started happening, he began to think about his options.

"I met with my urologist for my annual checkup and we discussed the possibility of doing a surgical procedure, which I was not too excited about," Lucia recalls.

As men age, the prostate often enlarges, which makes benign prostatic hypertrophy (BPH) , a noncancerous condition, extremely common among this age group. Symptoms can include a weak urination stream, an inability to urinate, frequent urination, leaking, and rushing to the bathroom, all of which can disrupt one's daily routine.

"My wife and I often travel up to Bangor, Maine, from our home in New Hampshire, and we never drove by a visitors' area without stopping," Lucia explains. "Getting sudden urgencies and not being able to quickly find a restroom creates a big problem."

While medications can offer relief, surgical options, such as a transurethral resection of the prostate (TURP), are often recommended.

In this procedure, the surgeon places a rigid metallic scope through the penis and into the prostate gland. While this effective procedure is the current standard, recovery time is long and possible side effects include decreased sexual function, bleeding, pain and bladder control issues.

Lucia learned about another option — prostate artery embolization (PAE) — and the experts in Interventional Radiology (IR) at BIDMC who were performing this minimally invasive, innovative technique to effectively treat BPH without surgery. Through a pin-size hole in the wrist or groin, an interventional radiologist inserts a small catheter into the artery supplying the prostate to remove blood flow, allowing the gland to shrink.

Sahil Mehta, MD, who cared for Lucia, says this is perhaps the most minimally invasive and painless way to treat BPH today.

"Many patients experience successful results," says Mehta, who has performed the most PAEs in Greater Boston and is one of a handful of US physicians specializing in them. "So many men are frustrated with their current quality of life when they have BPH. However, within weeks of this procedure, they can do things they haven't done in years, like play a full round of golf or watch an entire movie, without interruption."

And within a few weeks after PAE, the prostate size can shrink by 30 percent or more, easing urinary symptoms, sparing erectile function, and significantly increasing one’s quality of life.

"I Was Pleasantly Surprised"

After Lucia had his PAE in September 2019, he began to notice improvements almost immediately.

"During the first week, I was already much more comfortable and getting a lot of the benefits in terms of being able to urinate and not having the urgency," he said. "I was pleasantly surprised because the process was relatively painless."

Lucia was fully recovered after a month and no longer needs three different BPH medications he had been taking for years, adding that his wife now "marvels" at how they can take a spontaneous road trip without needing to make any extra stops.

BIDMC's Interventional Radiology team has performed among the most PAEs in the country and is currently seeing new patients.

BIDMC is part of Beth Israel Lahey Health, a new health care system that brings together academic medical centers and teaching hospitals, community and specialty hospitals, more than 4,000 physicians and 35,000 employees in a shared mission to expand access to great care and advance the science and practice of medicine through groundbreaking research and education.

Read More About Prostate Artery Embolization: 'It Was a Game-Changer'