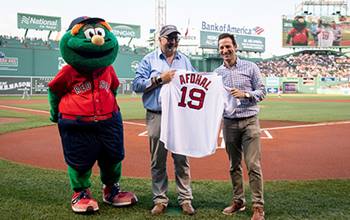 A veteran in his field, Nid Afdhal, MD, was recently named Chief of Gastroenterology, Hepatology and Nutrition at Beth Israel Deaconess Medical Center (BIDMC), the official hospital of the Boston Red Sox.

For more than two decades, he has led innovative research for liver disease, overseeing clinical trials that have led to new cures for hepatitis C. On July 12, the Red Sox recognized Dr. Afdhal’s clinical and scientific expertise by honoring him as a Medical All-Star at Fenway Park.

Dr. Afdhal is a distinguished mentor who is constantly working to advance the mission of his division, which cares for patients with conditions such as inflammatory bowel disease, certain kinds of cancer and celiac disease.

“Gastrointestinal conditions affect so many people, often based upon what we eat,” he says. “Enjoy your Fenway Frank today, but be moderate in your choices tomorrow. Moderation and balance are key to a healthy gut, liver and life.”

Get to know this all-star physician outside of the hospital.

Are you a baseball fan?

NA: I became a fan when I arrived in Boston just in time for the 1986 World Series–and we all know how that ended. I rapidly became a Red Sox fan, and I love going to games every year.

Q: Did you ever play baseball?

NA: No, I played cricket as a youngster in Ireland. But after moving to Boston, I became involved in my son’s little league and my favorite memory is his team winning the North End/Beacon Hill/Charlestown Division of Boston Little League Championship.

Q: Who did you bring with you to the June 21 game?

NA: My wife, Clare, and our daughter, Sophie. We’re a family of Red Sox fans!