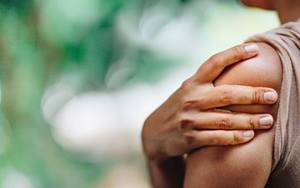 BOSTON – Beginning in the first trimester of pregnancy, the body begins to produce the hormone relaxin, which loosens the expectant mother’s muscles, joints and ligaments to help her body accommodate a growing baby and prepare for birth. When Edward Rodriguez, MD, PhD, Chief of Orthopedic Trauma in the Department of Orthopedic Surgery at Beth Israel Deaconess Medical Center (BIDMC) observed that patients with a common and painful joint condition called arthrofibrosis experienced long-lasting relief during and after pregnancy, he reached out to his colleagues in the lab to confirm his suspicion that relaxin could explain the phenomenon.

In a first-of-its-kind study, Rodriguez collaborated with Ara Nazarian, PhD, a principal investigator in the Center for Advanced Orthopaedic Studies at BIDMC, and Mark Grinstaff, PhD, Professor of Biomedical Engineering, Chemistry, and Medicine at Boston University, to investigate whether relaxin’s joint-loosening properties could be applied to alleviate symptoms of arthrofibrosis. The team found that multiple injections of human relaxin directly into the afflicted joint restored range of motion and improved tissue health in an animal model of frozen shoulder, a painful and debilitating form of arthrofibrosis particularly common among middle aged, often diabetic women. The findings are published in the journal Proceedings of the National Academy of Sciences (DOI: 10.1073/pnas.1900355116).

“Current treatment options for arthrofibrosis, such as physical therapy and medication provide only marginal or temporary relief and do not address the source of the pain and stiffness,” said Nazarian, who is also Associate Professor of Orthopaedic Surgery at Harvard Medical School. “While more research is needed, repurposing this pregnancy hormone as a treatment for arthrofibrosis could provide an unprecedented opportunity.”

Most common in the shoulders, knees, hips, wrists and ankles, arthrofibrosis affects more than five percent of the general population. Characterized by pain accompanied by a reduction in range of motion, arthrofibrosis is caused by an excessive build-up of scar tissue in the joint, triggered by injury, trauma, long-term immobility, or surgery. Up to a third of patients who have undergone ACL reconstruction surgery can end up with arthrofibrosis.

In the new study, using human cells in vitro, Nazarian and colleagues showed that a specific version of the hormone, human relaxin-2, inhibits cells’ production of scar tissue by indirectly downregulating production of collagen – the strong protein that supports joints and other tissues throughout the body but is overproduced in scarring. Next, they showed in an animal model of frozen shoulder, that multiple injections to the joint resulted in significant and lasting improvements in range of motion, while a single injection to the joint, or systemic treatment did not. Similarly, when the scientists looked at the joint tissues, the animals that received multiple injections of relaxin to the joint appeared to undergo changes indicating restorative healing.

More studies will be necessary before investigating relaxin’s efficacy for treatment of arthrofibrosis in humans, but the team is optimistic that the naturally-occurring and well-tolerated hormone could offer relief for millions of people.

“Arthrofibrosis is a widespread disease, occurring in all joints, and its high incidence, limited treatment options and poor patient outcomes call for alternative and effective non-surgical solutions,” said Rodriguez, who is also an Associate Professor of Orthopaedic Surgery at Harvard Medical School. “The local delivery of relaxin-2 offers a potential paradigm shift in the treatment for the millions of individuals who are affected by arthrofibrosis every year.”

This work was funded in part by support from Mr. and Mrs. Tom and Phyllis Froeschle and the BU Ignition Award.

Grinstaff, Rodriguez and Nazarian are co-inventors on a patent application submitted to the USPTO on the application of human relaxin-2 as a treatment for arthrofibrosis.