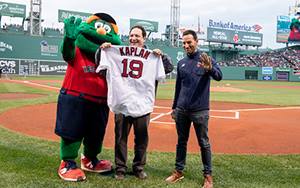 As we recognize Men’s Health Month, the Red Sox and BIDMC honor Irving Kaplan, MD, a radiation oncologist who has dedicated his career to treating patients with prostate cancer and other genitourinary cancers.

“Some men hesitate to discuss health concerns with their doctor. But certain conditions like prostate cancer are curable and much easier to treat the earlier you diagnose it,” Kaplan says.

Kaplan is a leader in using CyberKnife®, which contrary to its name, is a non-surgical system that delivers a very narrow radiation beam to the tumor precisely, without harming surrounding tissue.

Beyond his clinical leadership, Kaplan’s research strives to improve the safety of care to provide patients the best possible outcome. “Radiation has much fewer side effects than in the past and it’s a very effective form of treatment,” he says.

Get to know this all-star physician outside of the hospital.

Are you a baseball fan?

IK: Yes, I love going to games here in Boston but I’m loyal to my roots—the Chicago Cubs.

Q: Did you ever play baseball?

IK: We didn’t play baseball in Chicago, we played 16 inch softball. No gloves, just the ball and a bat. The ball doesn’t travel as far as a baseball when you hit it, so it’s an easy pick-up game in the neighborhood.

Q: Who did you bring with you to the June 21 game?

IK: My wife and life partner, and two members of my team: Aaron Vivenzio, a radiation therapist who operates the radiation machine, and Edward Holupka, PhD, Chief of the Division of Medical Physics, who has developed systems that have aided in improving the accuracy and precession of radiation treatments.