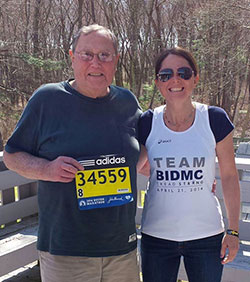 Robin Maxcy first joined BIDMC’s Boston Marathon team in 2013. At the time, she was running in honor of her dad, Richard, who was a BIDMC patient for more than two decades.

“My dad had many long-term ailments, but the amazing teams of doctors, nurses and other staff helped balance his treatment with quality of life,” Robin says. “I joined the medical center’s Marathon team because it was a concrete way for me to give back to a place that’s given my family so much.”

After Robin was part of Team BIDMC for three consecutive years, Richard passed away in 2016. “His last year was tough. But with his strong will and extraordinary healthcare team, we saw medical miracles occur more than once and feel lucky to have had so much time with him,” Robin says.

Just like last year, Robin will conquer 26.2 miles this April 15 in memory of her dad.

“I’m still adjusting to saying the words, ‘in memory of my dad.’ It’s hard to believe it’s been over two years now since he passed. He was so loved and is truly missed by my family and all who knew him,” she says.

“We interacted with so many different people while my dad was a patient,” she explains. “Too many to name, but all very special to us in their own way.”

Donations made in support of Robin’s Marathon journey will benefit BIDMC’s Annual Fund, which provides flexible funding to advance priorities and projects across the medical center.

“Thank you for this opportunity to continue my dad’s legacy,” Robin says. “I’m so proud to represent Team BIDMC.” Read more about Robin and support Team BIDMC.