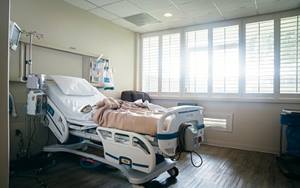 A homeless individual is one who lacks fixed and reliable housing, and approximately 553,000 people fit that description on any given night in the United States. A new retrospective cohort study led by investigators from Beth Israel Deaconess Medical Center (BIDMC) and Brigham and Women’s Hospital examines patterns, causes and outcomes of acute hospitalizations between 2007 and 2013 for homeless individuals and non-homeless control groups in three populous and diverse U.S. states: Florida, California and Massachusetts. Data suggest a rise in acute hospital use among homeless individuals for mental illness and substance use disorder. The results were published in the journal Medical Care.

To examine these trends, hospital discharge data was acquired from Massachusetts and Florida between 2001 and 2013 and from California between 2007 and 2011. This information came from the State Inpatient Databases (SID) of the Healthcare Cost and Utilization Project, created by the Agency for Healthcare Research and Quality. This dataset includes information such as homeless status, billing, demographics, and diagnoses. Hospitalization costs were determined by applying American Hospital Association cost-to-charge ratios to the total hospital charges provided in the SID.

“Some states, such as Massachusetts, have expanded Medicaid eligibility, which has increased rates of insurance among homeless individuals and improved access to care; this could have led to greater use of hospital services,” said Wadhera, who is also a cardiology fellow in the Cardiovascular Division at Brigham and Women’s Hospital. “The increase in hospitalizations could also reflect more concerning trends. The opioid epidemic has disproportionately impacted homeless population, and a repercussion of this may be an increase in acute hospitalizations. It is also possible that these patterns suggest inadequate outpatient care for homeless individuals, and that we need to do a better job of providing more consistent, reliable outpatient care to this population.”

“There is an urgent need to reduce financial and nonfinancial barriers to the use of ambulatory care, for behavioral health services in particular, to improve long-term management of physical and mental illness for homeless individuals,” said senior author Karen Joynt Maddox, MD, MPH, of Washington University in St. Louis. “We need better longitudinal data and further studies to understand how Medicaid expansion and other policy initiatives affect the health of this highly vulnerable population.”