You likely are aware that, for years, there has been disagreement and a lot of discussion around mammography recommendations. Specifically, there has been debate over when women should begin annual screening tests. Note that all of the recommendations are directed towards women at normal risk, not women considered at high risk or who already have a personal history of breast cancer.

For example, the United States Preventive Services Task Force (USPSTF) and the American College of Physicians have recommended screening every other year for normal risk women between the ages of 50 and 74. The American College of Radiology has suggested annual mammograms for women beginning at age 40, and the American Cancer Society's guidelines say that women between 40 and 54 should have annual mammograms, and, if all has been well, switch to every other year exams at age 55. In the United Kingdom, a national program offers mammograms every three years to women between 50 and 74.

It has been tough for women and their doctors to figure out the best decision, and the muddiness of the guidelines have been confusing for everyone. It is worth commenting here that every woman whom I know who has had breast cancer is a firm believer in annual mammograms for everyone, beginning at age 40.

Again, none of these recommendations are directed at women at high risk. For example, women whose mothers had breast cancer are usually told to begin annual screening when they are ten years younger than their mother was at diagnosis. Obviously if their mother was older at diagnosis, they are advised to follow the usual guidelines. Women with the BRCA1 or BRCA2 mutation are always followed often and closely. It becomes a talk with your doctor situation.

A study from the United Kingdom that has just been published in Lancet Oncology is likely to stimulate a lot more discussion. The UK Age Trial found that annual mammograms for women between 40 and 49 were associated with "a substantial and significant" 25% reduction in deaths from breast cancer over ten years.

The researchers also commented that, in the years since the trial first began, breast cancer treatments have improved, so that it is reasonable to expect that mortality rates may be lower. Although this is a positive disclaimer, it does not seem like a good enough reason to change the recommendation.

There have now been 23 years of follow up for the women enrolled in this UK study. The finding was that the survival gain from annual mammograms was concentrated in the first ten years. Beyond that, the mortality rates were no different between women who had been screened each year and those who were not

This kind of thinking is more complicated when applied to difficult choices about treatments or, as a current example, deciding about which activities are safe during the COVID-19 pandemic. When considering mammography schedules, it is useful to know the recommendations and then speak with our own doctors about our individual situation. 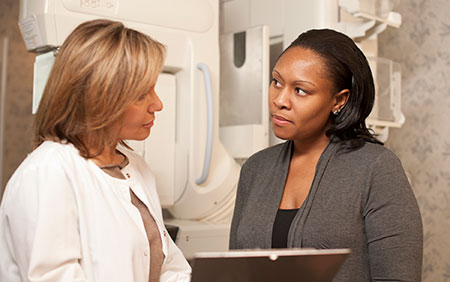 Read More About The Mammography Frequency Debate
See All Blogs