Knowing Your BRCA Status Improves Survival from Breast and Other Cancers

The BRCA1 and BRCA2 gene mutations can impact a woman's risk of developing breast and/or ovarian cancer over her lifetime. These gene mutations also increase the risk of a few other types of cancer. Women are at an increased risk of developing fallopian tube or peritoneal cancers, and men have an increased risk of prostate cancer. Both men and woman have a higher risk of pancreatic cancer.

For the first time, there is now evidence that knowing one's BRCA mutation status before having a cancer diagnosis is associated with better survival.

These are sobering numbers, and many women who have a positive BRCA gene test opt for prophylactic mastectomies and/or oophorectomies (having their ovaries removed). Clearly both of these surgeries have many implications and it is never a simple decision. Women need to consider both their medical risk and their emotional reactions to so profoundly changing their bodies.

Why Get a BRCA Gene Test If You Don't Have Cancer?

For the first time, there is now evidence that knowing one's BRCA mutation status before having a cancer diagnosis is associated with better survival. Some women, especially those with a strong family history or of Ashkenazi Jewish heritage, may have opted for gene testing as part of their ongoing health care. Many women, however, don't do this unless there is a strong reason to do so such as a personal breast or ovarian cancer diagnosis, or the diagnosis for one's sister or mother.

A recent study from Israel, reported in JAMA Oncology, found that women who knew their carrier status (specifically, who were gene positive) before a cancer diagnosis did better. Their cancer diagnoses were made at an earlier stage and their 5-year survival was longer than women who were not gene tested until after a cancer diagnosis.

This makes a lot of sense. First, a woman who opted for gene testing earlier likely was someone who was attending carefully to her health and was aware of her risk factors. If she did test positive for the BRCA1/2 gene, it is almost certain that she was then followed with careful screening. This usually translates to an annual mammogram as well as an annual breast MRI, scheduled so that one or other happens every 6 months.

Although this is important information to know, it probably does not change your care. Anyone who reads my blog likely has already been diagnosed with cancer. It may mean, however, that you tell others about this finding. If they are from a high-risk group, suggest a conversation with their doctor about genetic testing. They can also learn more about BIDMC's Cancer Genetics and Prevention Program here. 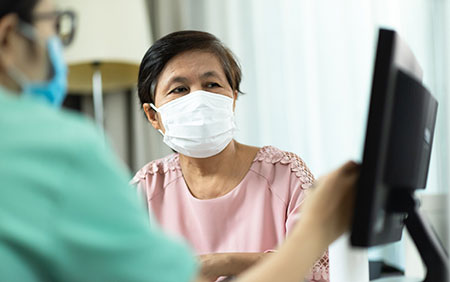 Ovarian Cancer: Who Is At Risk?

Read More About Ovarian Cancer: Who Is At Risk?
See All Blogs