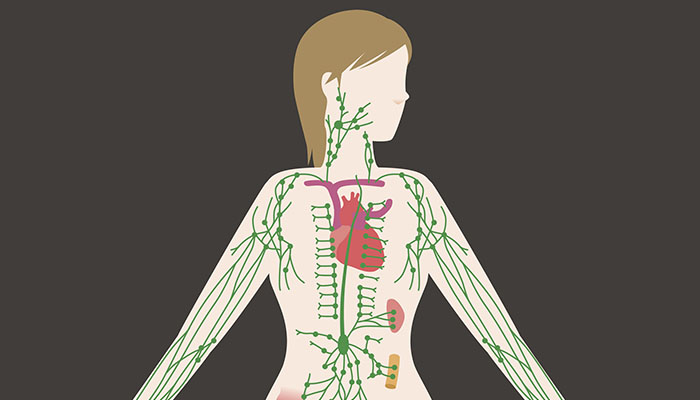 Many breast cancer survivors worry a lot about developing lymphedema. As you know, lymphedema is swelling in an extremity, an arm in this case, that is caused by disruption to the lymph drainage system. For women who have had breast surgery, this is related to axillary lymph node surgery, especially when more than a single sentinel node was removed. Women at greatest risk are those who had a full axillary dissection and radiation therapy that included the underarm in the radiation field.

Lymphedema is not curable. Once it has happened, it can be managed and can be better or worse, but it persists. Some women experience very mild swelling in an arm or hand, sometimes it is not even noticeable. At the other end of the spectrum, there are women whose arm and/or hand become very swollen. Generally this is not uncomfortable, but is can be disfiguring and embarrassing and even limit clothing choices. Lymphedema is treated by physical therapy, manual massage, tight wrapping, and sometimes a machine that gently pressures and then releases the arm.

In more extreme cases, there is new surgery that bypasses or transplants lymph nodes from other parts of the body to improve drainage in the arm. BIDMC is one of the few hospitals, and the only one in New England, where this surgery is offered. Read about this Lymphatic Surgery here.

It is impossible to predict who will develop lymphedema, and the statistics about it are highly variable. I have known surgeons who proudly proclaim: None of my patients ever have lymphedema, but I have always known some of their patients who did. It can happen a few weeks or months after surgery, but it can also happen years later.

The recommendations have included not lifting anything over five pounds, wearing gloves when gardening, avoiding saunas and even manicures, and considering wearing a lymphedema/compression sleeve on airplane flights. Women have been worried about weight lifting and some exercise programs and about carrying in the groceries. I have always heard never to carry anything in the arm extended position (e.g., a heavy suitcase), but to always pick things up to carry. Doctors believe that infections or injuries can bring on lymphedema, so we have been warned to carry an antibiotic cream and band aids in our purses and always be prepared to do a little first aide after a scratch or insect bite.

Recently, a number of good studies have debunked most of this advice and some have even called them old wives tales. The American College of Sports Medicine has stated that a gradual return to weight lifting does not increase the chances of lymphedema, and there are many good reasons to exercise regularly.

There has been a diminishment in the numbers of women developing this condition. This improvement is likely due to better surgical techniques and the standard use of sentinel node dissections rather than always a full axillary dissection. This means that many women have fewer lymph nodes removed, so it makes sense that their lymphatic systems are less damaged. Note, however, that sentinel node biopsy does not always mean that only a single node was removed. It depends on the individual’s physiology and the surgeon’s techniques and skill.

Although this is certainly reassuring news, it does leave us in something of a quandary. We can worry less, but we remember that lymphedema does happen and is very unpredictable. My own view is that, like many things in Cancer World, this becomes a personal choice based on our own worries and perspectives. For example, I had a full axillary dissection and radiation in 1993; so far, I have not been troubled by lymphedema. I have never worn a compression sleeve on an airplane, even on 18 hours flights, and I have gotten manicures in good salons for decades. I do, however, wear gloves when I garden, and I pay some attention to how I lift heavy grocery bags. Are these the right choices? Who knows?