The extracellular molecules of cartilage contain carboxyl, sulfate, and amino groups that are ionized under physiological conditions. Because collagen has nearly equal numbers of anionic and cationic groups, it contributes little net charge. In contrast, the glycosaminoglycans (GAG) side chains of the proteoglycan contain up to two anionic groups per disaccharide subunit and thus provide a net negative charge to the matrix. Since these ionic groups are "fixed" to the solid matrix they are referred to as "fixed charge", and the density of charge is referred to as the fixed charge density, or FCD.

The theories of electroneutrality and ideal Donnan theory can be used to predict the intratissue distribution of mobile ions relative to the FCD. In particular, electroneutrality states that the total positive charge in an area of tissue must be equal to the total negative charge. In the example shown in Figure 1, if a tissue such as cartilage is equilibrated in a bath of NaCl, the difference between the chloride (negative) and sodium (positive) concentrations must be equal to the FCD of the tissue. With the FCD being negative, the sodium concentration in the tissue will be higher than that of the bath. 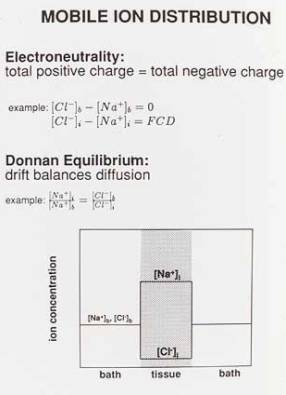 Figure 1: Schematic representation of the principles of electroneutrality and Donnan equilibrium as they relate to a section of cartilage tissue placed in a bath of NaCl.

Several mobile ions, including sodium, lithium, potassium, and chloride, are observable by NMR, and thus it might be feasible to measure the FCD through MRI measurements of these ion concentrations.

Since these ions are quadrupolar (have spin 3/2), and thus have several T2 time constants associated with their T2 relaxation, it is important to determine the NMR "visibility" under standard experimental conditions. This was done by comparing NMR results to inductively coupled plasma emission spectroscopy:

Under the conditions of the spectroscopy experiments employed (receiver dead time = 100 ms), the sodium was essentially fully observable by NMR. Chloride was only 40% visible by NMR.

Therefore, due to the abundance of sodium in body fluids and tissues, and its NMR observability, this ion was pursued for further study. The equations relating the calculated FCD to the NMR measured sodium concentrations are given in Figure 2. Figure 3 demonstrates the large variation in intratissue sodium expected given the range of FCD expected in cartilage under control and pathologic conditions. 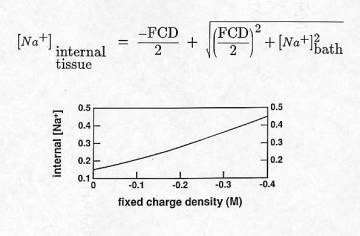 With these NMR techniques, the tissue FCD was measured to be -0.28M, and was tracked with varying bath ionic strength, pH, and salt composition.

This was first investigated in a system in which GAG is known to vary spatially, i.e. the calf distal ulna. Figure 1 demonstrated this spatial variation; in this figure, cores of cartilage samples were taken from different slices (depths) within the distal ulna cartilage; the variation in FCD calculated from NMR matches that from the biochemical assay of dimethylmethylene blue (DMB; Farndale et al, Biochim Biophys Acta 883:173, 1986) very well. (The slight offset between the two may be due to the standard used for the DMB assay.)

Figure 2 shows a proton image of the sample. The cartilage is seen as the bright signal between the bony epiphysis and metaphysis. The sample is surrounded by saline. A proton density image (b) and the profile across it (d) demonstrates a relatively uniform proton density across the cartilage. The sodium image (c) shows the expected high signal intensity (concentration) of sodium in the cartilage relative to the surrounding bath. The profile (e) shows substantial variation in sodium across the cartilage, similar to that seen in Figure 1. 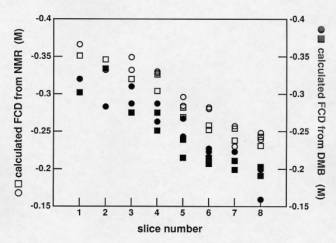 Figure 2: T2 weighted, proton density, and sodium images of the calf distal ulna. The high concentration of sodium, and the substantial variation of sodium across the cartilage, is apparent and matches the spectroscopy results of Figure 1. 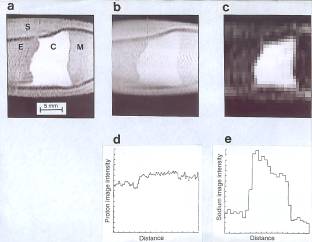 These studies demonstrate that sodium MRI can be used to evaluate the general distribution of sodium concentration, and hence GAG concentration, in cartilage.

As a means of evaluating possible alterations of T2 with cartilage degradation, we investigated the T2 relaxation times in control and degraded cartilage. The fast T2 relaxation time varied from approximately 0.2 ms to several ms for different conditions (Table 1). Therefore, given that these time constants are not known a priori, correcting for T2 decay in the MRI measurements needs to be done with caution.