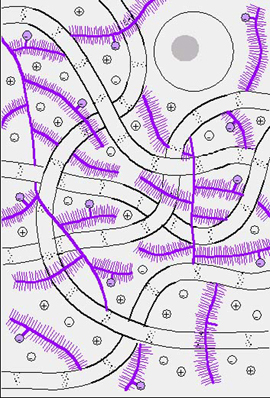 We have been developing several techniques for imaging the glycosaminoglycan (GAG) component of cartilage. The techniques are based on the fact that GAGs are charged under physiologic conditions, due to the abundant carboxyl and sulfate groups. Therefore, mobile ions will distribute in cartilage in relation to the concentration of the GAG molecules. If the concentration of the mobile ions can be inferred from an MRI measurement, the concentration of GAG can then be calculated. This approach is based on the pioneering work of Alice Maroudas (Biophys J 8:575-595, 1968; Connect Tissue Res 1: 69-77, 1972; Biochim Biophys Acta 177: 492-500, 1969; Biochim Biophys Acta 215: 214-216, 1970).

(Note that the NMR techniques are more precisely measuring the tissue fixed charge density, however the assumption is generally made that the fixed charge is predominantly due to GAG.)

In particular, two mobile ions have been investigated for use in basic and clinical studies, sodium and the MRI contrast agent Gd(DTPA) 2- (Magnevist; Berlex, NJ):

Sodium and lithium are naturally abundant in the body fluids and tissues, and are NMR observable. Therefore, we first investigated their use for measuring the GAG component of cartilage in both spectroscopy and imaging modes.

Given the issues with the fast and varying T2 NMR relaxation time identified in the sodium studies, and the practical constraints of applying sodium in large clinical studies, we began to investigate an approach to measuring GAG through the use of a charged MRI contrast agent, Magnevist (Berlex, NJ). This technique, referred to as dGEMRIC (delayed Gadolinium Enhanced MRI of Cartilage) has been applied to culture studies to follow GAG depletion and replenishment under a variety of situations. The in vivo (clinical) feasibility and validity of this technique to detect variations in GAG in human cartilage has also been demonstrated.