Furthermore, the diffusion coefficient of water in cartilage was not affected by going to pH 2 in tissue, which would titrate the charge groups to decrease the fixed charge in the tissue. In addition, the relative diffusivity of solute in cartilage relative to saline was similar for a number of anions and cations studies, consistent with the view that charge is not an important determinant of the intratissue diffusivity of small solutes in cartilage.

The results just described were obtained with an effective diffusion time of 13 ms, in other words, the water molecules were probed as to how far they moved within 13 ms. Further studies demonstrated that the diffusion coefficient was dependent upon the time allotted for diffusion (Figure 1). This implies that the diffusion of water is restricted by structures within the tissue on the time scale of the measurement. The shape of the curve of diffusivity versus diffusion time was not affected by the removal of GAG by trypsinization of cartilage, implying that the restrictions are due to collagen. 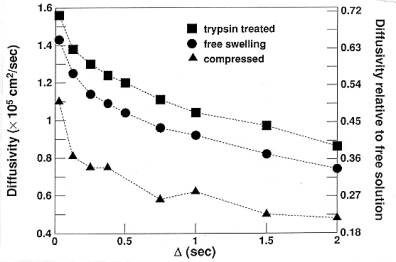 For more details, please refer to: