About Our Bone Biomechanics Research

Micro-compression in combination with three-dimensional micro-computed tomography allows visualization of failure initiation and propagation in a nondestructive way. We found step-wise compression to be a valid approach for image-guided failure assessment with high precision and accuracy as compared to classical continuous testing. However, because the technique was validated using aluminum foams and bone from a single whale vertebra, the reproducibility of the technique for human trabecular bone remains unknown. Also, it is unknown whether the coring technique used to fabricate these cylinders is adequate for obtaining human osteoporotic bone samples. In the future, once these issues are resolved, we hope to address the controversial topic of bone "quality", i.e. whether bone architecture, damage accumulation, and bone mineralization predict structural competence better than bone density alone. The large standard deviations for the mechanical properties of the tested specimens support the notion that density is not the sole factor affecting mechanical properties of bone. We expect these findings to improve our understanding of the relative importance of densitometric, morphological, and loading factors in the etiology of spontaneous fractures of the spine. Eventually, this improved understanding may lead to more successful approaches to the prevention of age-related fractures. 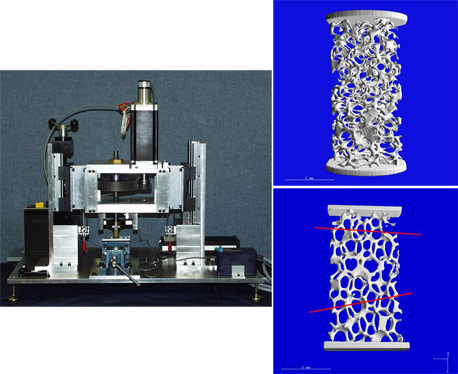 We have shown that BV/TV alone from µCT imaging provides a better description of the strength of the material than mineral content measures obtained from DXA imaging. This is partially due to the higher resolution of µCT imaging and its ability to provide microstructural information in addition to densitometric measures of non-uniform mineralized tissue. Additionally, we have generated a strength/density/morphometry profile of the human proximal femur to be considered for applications such as design of implants and the study of impact loading of hip fractures among the elderly.

A Novel System to Assess Torsional Properties of Bone 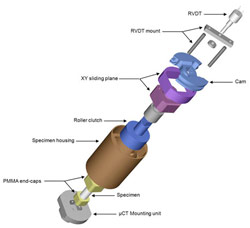 This approach enables one to perform proper continuous and/or incremental stepwise torsion testing in order to obtain both mechanical and visual insight in the failure modes of bony structures of interest. Furthermore, the contribution of trabecular microstructure to the overall torsional properties of whale cancellous bone specimens was further investigated, highlighting the importance of the subregion with the minimum polar moment of inertia as a predictor of the torsional behavior of the entire specimen.

Torsional mechanical testing captures torsional stiffness which is a product of torsional constant (k) and torsional shear modulus (G). Torsional constant, representing geometrical stiffness, is identical to the polar moment of inertia (J) for a beam with circular cross-section; although for a structure with irregular cross-section such as bone, there are no analytical equations for calculation of k. So, in order to calculate shear modulus from torsional testing, a set of assumptions should be made which will directly affect quality of the models to be generated. These assumptions can be summarized in material isotropy and heterogeneity and transverse and longitudinal geometric variations.

The traditional approach is to consider bone as an elastic, isotropic, homogeneous material. Although this simplified model allows for using simple formulas to approximate material properties, it introduces errors in calculations. However, bone has a complex hierarchical structure and an anisotropic composition and to account for differences in material properties of bone as an anisotropic material, one should consider 21 independent elastic constants. Reilly and Burstein suggested that long bone could be modeled as a transversely isotropic material. Evaluation of different human and bovine bone specimens showed that orthotropic models (different material properties in three radial, circumferential and longitudinal directions) can sufficiently describe material properties of long bones. Our approach assumes that cortical bone is a shape intrinsic orthotropic material, first introduced by Cowin et al. based on Saint Venant's elastic torsion equations, describing a situation where symmetry coordinate system for orthotropic symmetry coincided with the long axis of rodent long bone. This approach allows us to use known isotropic solutions to assess torsional properties of a bone with shape intrinsic orthotropy, given that the exterior and interior bounding curves of the lateral cross section are of the same family of curves.

Geometrical modeling of the whole bone has also evolved in recent decades. Early models considered bone as a solid cylinder with constant circular cross-section across the length. To improve the cross-sectional modeling, solid elliptical, hollow circular and hollow elliptical forms with similar area and torsion constant to those of the midshaft or the minimal cross-section of the same or contralateral bone have been proposed. Among these models, hollow elliptical cross-section with similar area and torsion constant to the actual mid-shaft cross-section is the most commonly used model. While overly simplified geometric modeling of long bones result in significant overestimation of the calculated shear modulus values, the advantages of using finite element analysis based methods to assess bone cross-sectional geometric properties must be weighed against the backdrop of complexity, time and cost when analyzing uniformly shaped and sized bones.

Another aspect of geometric modeling is considering lengthwise variation of the bone cross section. Studies on human long bones have revealed significant variations in area and torsion constant across long bones, which can affect proper modeling of these structures. Levenston et al. approached this problem with a multi-prismatic model in which each prism is representing a corresponding cross-section of the bone with similar A and k. They compared predicted values from five different mono-prismatic (hollow circular, hollow elliptical) and multi-prismatic (hollow circular, hollow elliptical and true bone section) models with k and A values obtained from a finite element model. Using the multi prismatic approach without addressing cross-sectional geometry reduces the calculated modulus error by half, thereby emphasizing the importance of this concept. Since non-invasive high resolution imaging modalities were not widely available at that time, Levenston et al. proposed a compromise solution to use a multi-prismatic model with five true bone cross-sections capable of reducing the modulus errors to 3 percent.

Having established the limitations associated with analysis of torsion, and in light of the work performed by researchers prior to this project, we have proposed a relatively simple method to assess torsional properties of long bones using data from commonly available high resolution imaging modalities such as micro-computed tomography. In order to first validate the efficacy of the proposed method, we manufactured three rat femurs through rapid prototyping using a plastic with known material properties. We then employed the commonly used methods put forth by Ekeland et al. and Levenston et al. (5 multi-prismatic model) in addition to the method introduced in this study (largely based on the work of S.C. Cowin) to negate the effects of structure and calculate the shear modulus of the material. The results indicated that the conventional model put forth by Ekeland et al. resulted in 96 percent overestimation of the shear modulus compared to the results provided by the plastic manufacturer. The Levenston et al. model resulted in 7 percent underestimation of the shear modulus, whereas the method proposed in this study resulted in 6 percent overestimation of the shear modulus. While the plastic used in the study is an isotropic material, the overriding goal was to manufacture rat femurs using a material with known mechanical properties and then subject them to torsion. In that regard, the method established here was validated with torsion data as opposed to finite element estimations.

Having validated the analysis method proposed in this study, we aimed to derive relationships expressing torsional properties of rat bone as a function of µCT based bone volume fraction or apparent density over a range of normal and pathologic bone density. Our results indicated that a regression model with either shear modulus or shear strength as the dependent variable and bone volume fraction or apparent density as the independent variable described at least 81 percent of the variation in torsional properties of normal and pathologic rat cortical bone. The incorporation of pathologic bones from ovariectomized and partially nephrectomized animals enhances the range of bone density and provides a relationship that describes both normal and pathologic bones. In all cases, bones from ovariectomized animals possess the highest cortical thickness, density and bone volume fraction, and hence the highest torsional strength. This trend could be interpreted as a compensatory effect (periosteal expansion) in countering the adverse changes in trabecular bone structure and mechanics due to ovariectomy. Moreover, bones from partially nephrectomized animals encompass the lower density, bone volume fraction and strength range of the distribution, with bones from control animals filling the gap between the two disease models. To the best of our knowledge, torsional properties of rat femur as a function of bone volume fraction or apparent density have not been reported before.